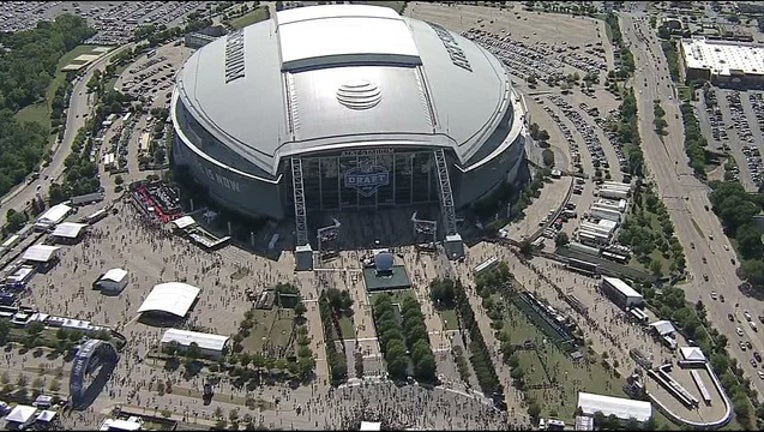 ARLINGTON, Texas (AP) - The Dallas Cowboys want a do-over on hosting the Super Bowl after horrid weather and a seating fiasco ruined their first try seven years ago.

While the wait will easily be more than a decade and with no indication the big game is coming back soon, last weekend's draft at least showed the NFL that what is becoming its spring Super Bowl went off without a hitch in North Texas.

"Obviously we've got a little chip on our shoulder about that one because we had a snowstorm and it didn't go perfect," executive vice president Stephen Jones said last week, referring to the 2011 title game.

"There's a big school of thought in the league that these things should go to kind of vacational-type spots, South Florida and Southern California and Phoenix and New Orleans. I get that. We'd still like a redo there."

The Cowboys hosted the first draft in an NFL stadium, and the league said about 100,000 people showed up in and around AT&T Stadium in Arlington, halfway between Dallas and Fort Worth, for the first round Thursday night.

Crowd size was limited by the league to about 20,000 indoors, using just one end of the 80,000-seat stadium with a retractable roof, which was closed. The largest screens of the giant video board that hangs over the center of the field were mostly out of view.

The theater setup is still preferred by the NFL for an event that spent many years at Radio City Music Hall in New York before back-to-back drafts in Chicago and last year's popular stop in Philadelphia on the steps of the art museum in front of the Rocky statue.

This larger venue allowed officials to try something they'd been thinking about for a while. Groups of seats designated for fans of each team on the field in front of the stage were a hit. The idea derived from political conventions fed what officials thought was an energetic setting.

"It exceeded our expectations in terms of the energy down here," said Peter O'Reilly, who oversees special events for the NFL. "It's been a terrific event for us as the draft continues to evolve."

As always, the Cowboys were worried about the weather. It was just about perfect, unlike the unprecedented ice storm that paralyzed the Dallas area most of the week before the Super Bowl. Of course, that was in midwinter.

On top of that, about 400 fans ended up without a place to sit when roughly 1,250 seats in temporary bleachers were declared unsafe hours before kickoff in Green Bay's 31-25 victory over Pittsburgh.

A lawsuit faulted Jerry Jones for trying to break the Super Bowl attendance record of 103,985 (it fell 766 short), and the outspoken Cowboys owner was forced to testify in federal court.

There was no such drama this time, and the draft accomplished what the Cowboys wanted: treating their fans while showcasing Texas as one of football's cradles.

"It's understated even, as big as it is, how much the fans love the draft and love the drama and uncertainty that goes with it," Stephen Jones said. "For our fans to be able to touch it and go out there and see what it's all about and see this firsthand ... this is football country."

Stephen Jones doesn't expect the draft to come back soon because the idea now is to move it annually. O'Reilly isn't sure it will be in a stadium again because each city has ideas about how to make the draft unique.

Super Bowls have been awarded through the 2021 season , including two with new stadiums (Atlanta, Los Angeles) and another with a renovated one (Miami, which will get its record 11th title game).

But the Cowboys have this much going for them: The NFL now has a fresher memory that has nothing to do with ice falling off the roof and hitting Super Bowl workers, or fans getting crammed into standing-room areas when they were supposed to have a place to sit.

"We're just thrilled with this week," O'Reilly said. "This draft certainly reflected really well on this market and its ability to put on major events."