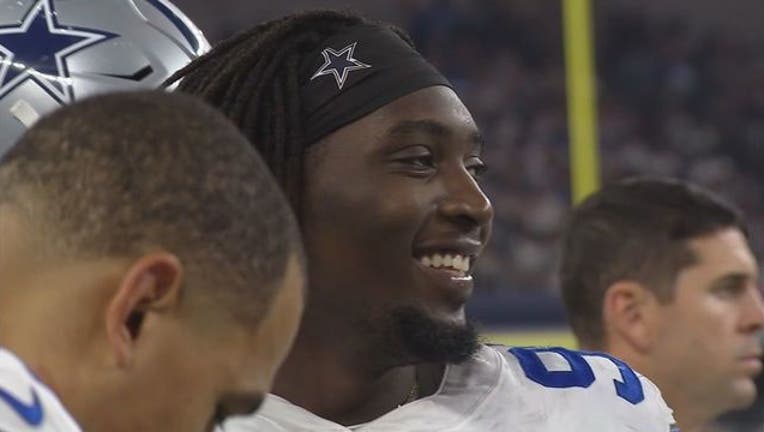 FRISCO, Texas (AP) - Dallas defensive coordinator Rod Marinelli remembers the night the Cowboys traded up in the second round of the 2014 draft to grab DeMarcus Lawrence because they thought he was the last pass rusher on the board with the skills to become elite.

Four years and several significant draft decisions later, Dallas is in line for its highest defensive ranking since 2003, and on the verge of joining that Bill Parcells-coached team as a defense-first playoff qualifier.

The Cowboys reversed the offense-dominated formula of quarterback Tony Romo's era without a sky-high draft pick such as star running back Ezekiel Elliott, the No. 4 overall choice two years ago.

Instead, they stuck with their plan in the middle and the end of the first round, and took a number of second-round gambles that are in various stages of paying off.

"I just think we've been diligent in the way we look at the people we've drafted, the movement, the skills, the attitude, the character, hitting," Marinelli said. "Is it really important to them? We've just kind of stayed on course with that. You start seeing it."

The defense kept Dallas afloat in the playoff race while the offense struggled through the first half of the season. Then came a breakthrough performance against New Orleans that's part of a five-game winning streak. Dallas (8-5) can wrap up the division title with a win at Indianapolis (7-6) on Sunday.

Lawrence, the first pass rusher Dallas drafted after releasing franchise sacks leader DeMarcus Ware, was second in the NFL last season with 14 1/2 sacks. He's unlikely to reach that number again but gets praise across the board for how well he has played following his breakthrough season.

Randy Gregory is emerging opposite Lawrence after the Cowboys took a chance on him late in the second round in 2015 despite off-field concerns. He played just one of 32 games the past two seasons because of substance-abuse suspensions but has five sacks in seven games, offset somewhat by some crucial penalties.

Dallas took another second-round gamble the next year on linebacker Jaylon Smith, who missed his rookie season recovering from a knee injury sustained in his final game at Notre Dame. After an uneven debut last year, Smith appears to be the middle linebacker of the future now.

Leighton Vander Esch was the 19th choice in this year's draft and has emerged as a star in the absence of 2016 All-Pro Sean Lee , who is close to returning from a hamstring injury.

Byron Jones, a late first-rounder in 2015, is thriving in a move to cornerback after mostly playing safety his first three seasons. Chidobe Awuzie starts on the other side as a second-round pick last year.

"We've had to make an emphasis on it, to pick guys," coach Jason Garrett said. "We've selected guys high in the first round, in the second round, in the third round. I think you're seeing the fruits of those selections over the last few years."

There are a couple of late-round picks in safety Xavier Woods and nickel cornerback Anthony Brown and two undrafted starters in safety Jeff Heath and defensive tackle Antwaun Woods, a third-year player who started training camp as a fourth-stringer in his first year with Dallas.

Vander Esch has a chance to be the first rookie to lead the club in tackles since the team's coaches started tracking the stat in 1981. The Cowboys rank fifth overall and second in scoring defense.

The Cowboys drafted Vander Esch out of Boise State despite the need for a receiver after releasing franchise career touchdown catch leader Dez Bryant. Their first three picks in 2017 were defensive players.

The only high defensive pick whose impact is in question is 2017 first-rounder Taco Charlton, who was a healthy scratch last week against Philadelphia after battling a shoulder injury for several weeks and returning for one game.

"You can't overdo it and get too many. We understand," Marinelli said of defensive first-round picks. "But I think those first-rounders are guys that can impact the passing game. And the other guys, we've got to go make them players."