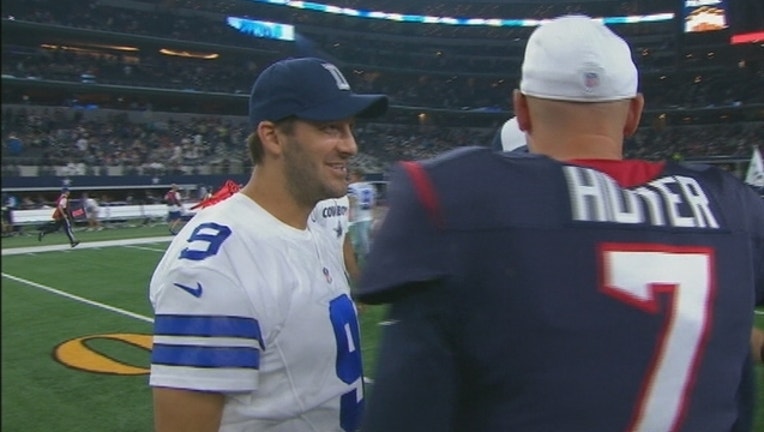 Texans third-string quarterback Tom Savage hurt his shoulder on the previous series, so backup Ryan Mallett was forced into the game. He handed off twice to third-string back Kenny Hilliard. But then the Texans tried to throw twice with Mallett, a pair of incompletions, and Dallas ran out the clock.

Savage threw a pair of touchdown passes, but gave up Corey White's 3-yard interception return for a touchdown and had a fumble that led to another quick score for Dallas.

The second-year player from Pittsburgh, never really in the competition that led to Brian Hoyer getting the starting nod over Mallett, was hurt on a tackle by Davon Coleman just after he threw a pass. The incompletion led to a punt, and the Cowboys drove to Malena's touchdown.

A tying 16-yard touchdown from Savage to Keshawn Martin in the fourth quarter came after Dallas' Nick Harwell muffed a punt that was first flagged for interference before officials waved off the penalty. It was the second punt by Houston's Shane Lechler after the first hit the huge video board over the center of the field.

White was alone in the flat when he stepped in front of a pass intended for Jaelen Strong and scored easily for a 7-7 tie in the third quarter. Two plays later, Savage was hit by rookie Ryan Russell and the ball squirted forward. Officials ruled an incomplete pass that was overturned on review.

The original call wiped out Dallas linebacker Keith Smith's 21-yard return. Rookie running back Gus Johnson scored on the next play, spinning out of a tackle while barely avoiding the sideline near the pylon.

Houston linebacker Tony Washington left with a chest injury in the first half and didn't return.