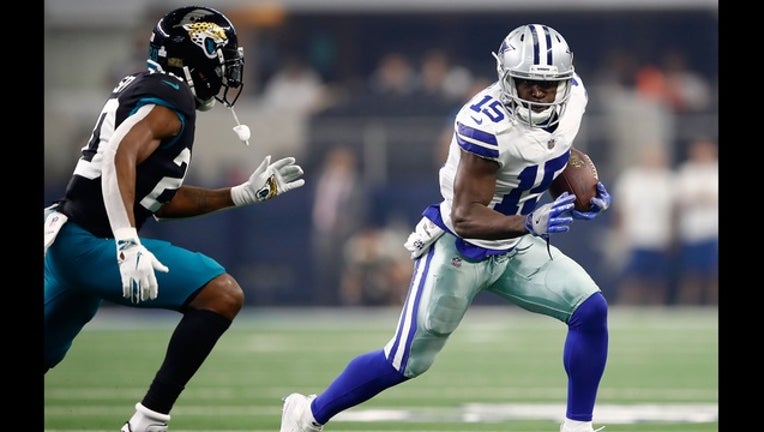 Deonte Thompson #15 of the Dallas Cowboys carres the ball as he is pursued by Jalen Ramsey #20 of the Jacksonville Jaguars in the first quarter of a game at AT&T Stadium on October 14, 2018 in Arlington, Texas. (Photo by Wesley Hitt/Getty Images)

FRISCO, Texas (AP) - The Dallas Cowboys are doing more shuffling at receiver as they try to revive one of the NFL's worst passing attacks before a critical game at Philadelphia.

The Cowboys on Friday waived one of their key offseason free agent pickups, receiver Deonte Thompson, while activating Noah Brown off injured reserve and promoting Lance Lenoir from the practice squad.

The moves come two weeks after the Cowboys traded their upcoming first-round draft pick to Oakland for receiver Amari Cooper, who was solid and scored a touchdown in his Dallas debut, a 28-14 loss to Tennessee. The Cowboys (3-5) visit the defending Super Bowl champion Eagles (4-4) on Sunday night.

Dallas is 29th in the league in passing and hasn't been able to compensate for defenses that focus on stopping star running back Ezekiel Elliott.

Brown hasn't played this season while battling a hamstring injury. He appeared in 13 games last season, with four catches for 33 yards. Lenoir appeared in one game last year.