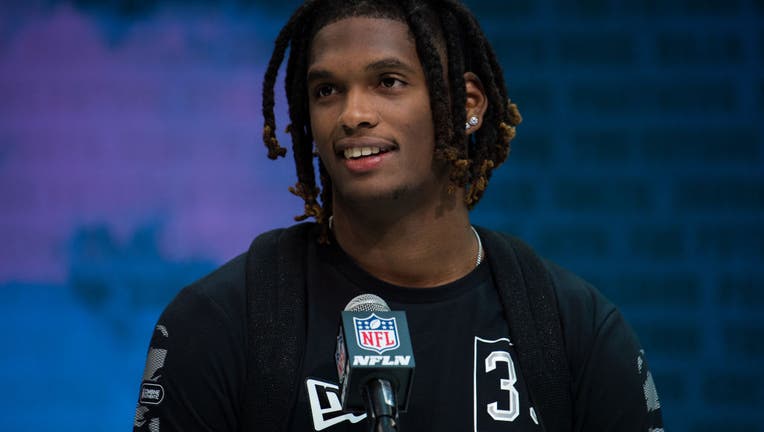 INDIANAPOLIS, IN - FEBRUARY 25: Oklahoma wide receiver Ceedee Lamb answers questions from the media during the NFL Scouting Combine on February 25, 2020 at the Indiana Convention Center in Indianapolis, IN. (Photo by Zach Bolinger/Icon Sportswire via

The Cowboys were surprised the former Oklahoma standout was available with the 17th pick in the draft.

Lamb joins a young receiving corps led by the 26-year-old Cooper and third-year player Michael Gallup, who is coming off his first 1,000-yard season.

Lamb was part of a strong draft class at his position, and was the third receiver taken behind Alabama teammates Henry Ruggs III (No. 12 to Las Vegas) and Jerry Jeudy (15th by Denver).

An All-American as a junior at OU, Lamb skipped his final season and left as the school’s career leader with catches of at least 40 yards (24). His 19-yard-per-catch average was the highest among Sooners with at least 130 receptions.

Lamb, who had 2,485 yards receiving and 25 touchdowns his final two seasons with the Sooners, is the first receiver drafted in the first round by Dallas since Dez Bryant out of Oklahoma State in 2010. Bryant is the club’s career leader in TD receptions with 73.

The addition of Lamb gives Dak Prescott another weapon as he prepares to play on a $31.4 million franchise tag. The Cowboys and their star quarterback couldn't agree on a long-term contract coming off a four-year rookie deal that paid Prescott slightly more than $4 million total.

As with all contracts for first-round picks, the Cowboys have a fifth-year option with the Lamb deal.