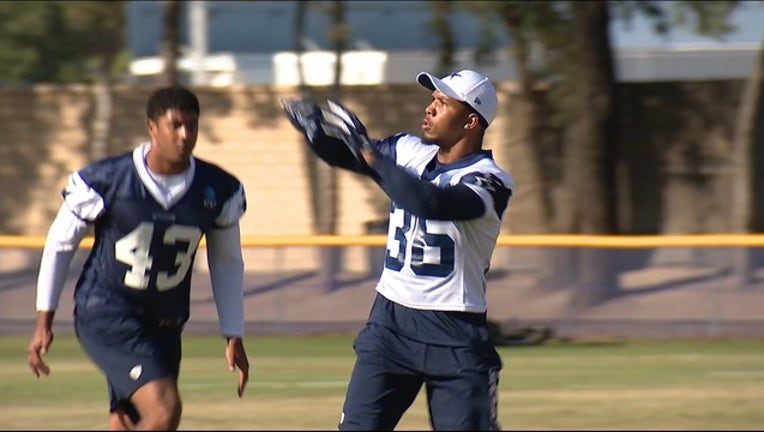 OXNARD, Calif. (AP) - Tony Pollard tried not to make too much out of what it meant for the rookie Dallas running back with Ezekiel Elliott away from training camp while seeking a new contract from the Cowboys.

Drafted in the fourth round with the idea of possibly being a more potent backup to the two-time NFL rushing champion, Pollard has risen to the top of the depth chart if practices at camp are any indication. And the former Memphis running back has impressed the right people.

"One of the most exciting players to me of this training camp," star quarterback Dak Prescott said. "The things that he's been able to do running the ball, catching the ball out of the backfield. He's making plays. And he's really an intelligent dude."

Pollard has heard from Elliott since the Cowboys reported to camp without a key part of an offense that helped Dallas win two NFC East titles in the former Ohio State star's first three seasons.

"He's done a good job just texting here and there, telling me he's been getting good feedback about me and just keep up the good work," Pollard said.

As long as Elliott stays away, Pollard will have the chance to build on that good feedback, which he says is the product of something simple.

"Just picking up the offense on the go, fast," he said. "Just being able to play comfortable and play up to speed like I've been doing since college."

Pollard's most notable work at Memphis came on kickoff returns, and the Cowboys believe he has the build to make those breakaway skills work in the backfield. Since kickoff returns are less frequent because of NFL rules, there's also talk of Pollard returning punts.

So far, he's mostly just practicing catching punts. That could change at some point.

"Got to worry about him getting too much," executive vice president of personnel Stephen Jones said. "Everybody wants him working on their stuff, whether it's special teams or offense. We've got watch his reps. He's doing a real nice job for us."

Pollard said he was a little overwhelmed at rookie minicamp , but not so much now.

"Now that I've been around the guys and been able to go over the playbook and things like that over and over, it's getting kind of easy," Pollard said. "It's a big difference, just from my confidence level and just trusting and knowing that I know what I have to do, not being shy or timid about things."

When camp started, Pollard was behind Darius Jackson, a fourth-year back who finally got the first carries of his career last year in a meaningless regular-season finale with Elliott sitting after Dallas had wrapped up the division title.

By the second week, Pollard was rotating in with the starters. Now he seems to be the clear first-teamer as long as Elliott isn't around.

"He's handling a lot of information on the offensive side of the ball, on the running game, the variation that you have in the passing game, whether you're protecting or running routes," coach Jason Garrett said. "He doesn't look like he's not playing to his speed because he is thinking too much."

The way Prescott sees it, Pollard is doing plenty of thinking in the hotel adjacent to the practice fields in California.

"When we're in the offense, or in the offensive unit, or in the team meetings, anytime coach calls him out on his responsibility, without a hesitation he's getting that right," Prescott said. "That's what you want to see from a young guy."

Pollard is about to get his first chance to show his progress against an opponent in the preseason opener Saturday night at San Francisco.

"Just a chance to just be out there in a game, go after somebody else," Pollard said. "It's just a chance for all of us to show that."

With Elliott missing, Pollard has taken advantage of his chances so far.