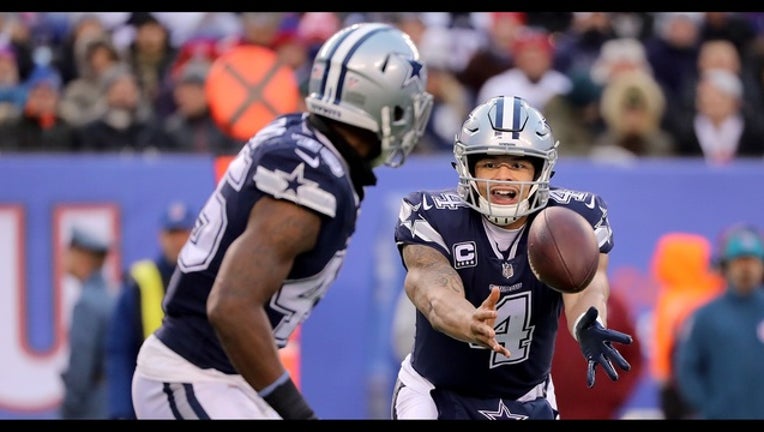 Dak Prescott #4 pitches the ball to Rod Smith #45 of the Dallas Cowboys in the second half during their game at MetLife Stadium on December 10, 2017 in East Rutherford, New Jersey. (Photo by Abbie Parr/Getty Images)

OAKLAND, Calif. (AP) - A season that began with such high expectations in Dallas and Oakland is headed to the finish with the Cowboys and Raiders struggling to stay alive in the playoff race.

Whether it's Ezekiel Elliott's suspension that helped derail Dallas (7-6) or the poor defense and offensive regression that doomed Oakland (6-7), these expected contenders have looked nothing like it heading into Sunday night's meeting.

"I think the two of us probably expected to have a few more wins at this point in the year," Raiders coach Jack Del Rio said.

"I just think that's just part of the hype around the game. It's understood. Been talked about a lot. It doesn't really matter. It's what you earn on the field."

After the Cowboys won 13 games and the NFC East last year and the Raiders had 12 wins for their first playoff berth since 2002, many experts believed both would be among the top contenders this season.

But Dallas got off to a sluggish start by losing three of four games early and then dropped the first three games during Elliott's suspension that ends after this week. But that might be too late for the Cowboys, who are in a three-way tie for eighth place in the NFC and need help to reach the playoffs .

"I know how important it is for us to win and that's the only thing we can control," quarterback Dak Prescott said. "The rest is kind of crossing fingers and I guess hoping, so for us it's just about winning out, and that's all we're focused on."

The Raiders dropped four straight to fall into an early hole but managed to get back into a tie for first place in the mediocre AFC West heading into last week. But Oakland lost 26-15 to the Chiefs and is one game behind Kansas City and the Chargers in the division and a game back in the wild-card race and also needs lots of help.

"If we don't beat Dallas, there's no playoff scenario," left tackle Donald Penn said. "All I can focus on is our next game because this has been a frustrating season."

Here are some other things to watch:

GOING DEEP: Oakland's Derek Carr ranks 32nd out of 35 qualifying quarterbacks this season when it comes to throwing deep. Carr has completed just 13 of 50 passes that traveled more than 20 yards downfield with three TDs, six INTs and a 48.5 rating. That's a big drop-off from a year ago when Carr had a 117.8 rating, completing 25 of 52 deep throws with seven TDs and two INTs.

"I think I completed more deep balls last year, throwing it times I shouldn't have thrown it," Carr said. "Throwing it up, and we all high-five and clap about those things. Again, when you lose, people just have a different way of spinning things."

ESSENTIAL LEE: Dallas linebacker Sean Lee returned from a three-game absence because of a hamstring injury with his fifth career 20-tackle game against the Giants. The 2016 All-Pro finished with 20, including 15 solos, and recorded his first interception since 2015, his longest drought when healthy. Despite missing five games overall with hamstring issues, Lee is tied for the team lead with eight tackles for loss after getting one against New York. The Cowboys are 1-5 in games Lee missed or didn't finish because of injury.

PRESSURE POINT: The Raiders have done a much better job generating pressure the past three weeks since firing defensive coordinator Ken Norton Jr. Oakland has 12 sacks in three games under new play-caller John Pagano, nearly equaling the total of 14 in the first 10 games. Bruce Irvin leads the way with five in that span, with Khalil Mack and Denico Autry adding three each.

DEZ DROUGHT: Cowboys receiver Dez Bryant has never played all 16 games without recording 100 yards receiving at least once. He's three games away from doing that. The 2014 All-Pro does have six touchdowns, including a 50-yard catch-and-run against the Giants. In his second year in 2011, Bryant didn't have a 100-yard outing but missed a game early with an injury. He had nine TDs that season.

STEPPING UP: The Raiders have gotten few contributions from this year's draft class with top two picks Gareon Conley and Obi Melifonwu spending most of the season on the sideline with injuries. The biggest contributor among the rookies has been an unlikely one in undrafted linebacker Nicholas Morrow, out of Division III Greenville College. Morrow has worked his way into the starting lineup and has been a key contributor on defense in a pleasant surprise for Oakland.

"I was late for OTAs and there were some days I only got two reps," he said. "I started off training camp in group four. My expectations have been way more than exceeded. I'm definitely blessed."