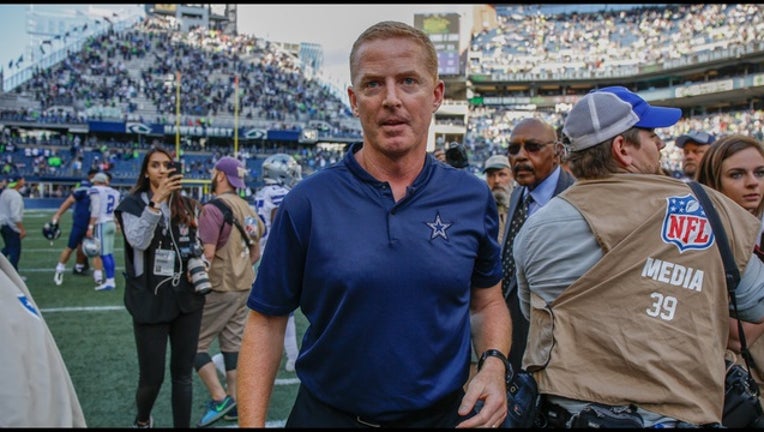 SEATTLE, WA - SEPTEMBER 23: Head coach Jason Garrett of the Dallas Cowboys heads off the field after losing 24-13 to the Seattle Seahawks at CenturyLink Field on September 23, 2018 in Seattle, Washington. (Photo by Otto Greule Jr/Getty Images)

ARLINGTON, Texas (AP) - The vibes are vastly different for a pair of 1-2 teams trying to put rough starts behind them.

The Dallas Cowboys can't fix a dysfunctional passing game even with the first 100-yard rushing performance of the season for star running back Ezekiel Elliott in a loss to Seattle.

The vibes won't matter to Patricia on Sunday when he goes after his first road win, just three weeks removed from a jolting 48-17 loss to the New York Jets at home in his debut.

"They're all one-week seasons," the former Patriots defensive coordinator said. "I would say the good thing about where we're at right now is we're starting to get into a little bit more season mode coming out of training camp, getting kind of into a little bit of a schedule rhythm."

Prescott is averaging 166 yards passing with a QB rating (74.9) exactly 30 points lower than his NFL rookie record when he was the league's Offensive Rookie of the Year in 2016.

Actually, the Cowboys figured out the running part with Elliott's 127 yards on 16 carries in a 24-13 loss to the Seahawks. But he had two crucial errors, stepping out of bounds before catching what would have been a tying touchdown pass in the first half, and fumbling when the offense was finally on track in the fourth quarter.

"We can't have our defense on the field the majority of those first halves," said Elliott, who is tied with San Francisco's Matt Breida for the NFL rushing lead at 274 yards. "We've got to come out there, get a fast start, execute, get some momentum and carry that through the game."

Things to consider in the first meeting between the teams since a 42-21 Dallas victory late in the 2016 season when Prescott and Elliott were the dazzling rookie duo leading the Cowboys to an NFC-best 13 wins:

Lions quarterback Matthew Stafford is set for his fourth appearance at the home of the Cowboys, just a few miles from his Dallas high school. Stafford won his hometown debut in 2011, rallying the Lions from 13 points down in the fourth quarter for a 34-30 win. He's lost two straight since, including one of the blemishes on his 0-3 playoff record. The Cowboys won a wild-card game during the 2014 season on Tony Romo's late touchdown pass.

Leighton Vander Esch, the Cowboys' first-round pick in April, is set for his first career start with Sean Lee sidelined by another hamstring injury. Lee was injured in Seattle, and Vander Esch tied for the team lead with a career-high 10 tackles. "There's a reason they drafted me in the first round, and I gotta live up to that," Vander Esch said.

Rookie Kerryon Johnson had the Lions' first 100-yard rushing game in nearly five years in the 26-10 win over the Patriots. While the Cowboys have the NFL's No. 3 overall defense, they've been more vulnerable against the run. Detroit's previous 100-yard game was by Reggie Bush (117) in a 40-10 win over Green Bay on Thanksgiving in 2013. "It's been a while," said Johnson, who had 101 yards on 16 carries. "But I feel like as a group, as an offense, as a team, that's what's expected of us. That's doing our job."

The Cowboys carried seven receivers last week, with six active against Seattle. Brice Butler could play after being inactive last week, days after rejoining his team from the previous three seasons. Butler signed with Arizona in free agency but was cut at the end of the preseason. If Butler is active, there's a chance Terrance Williams will be a healthy scratch for the first time in his six-year career. Williams has played just 22 percent of the snaps so far.

Detroit defensive end Ziggy Ansah, playing on the franchise tag this season, was ruled out on Friday. Ansah has not played since injuring a shoulder in the season-opening loss against the Jets. "He's working extremely hard and he's doing everything we're asking him to do," Patricia said before Ansah was ruled out. "I have the utmost respect for his work ethic and what he's trying to do to help us."