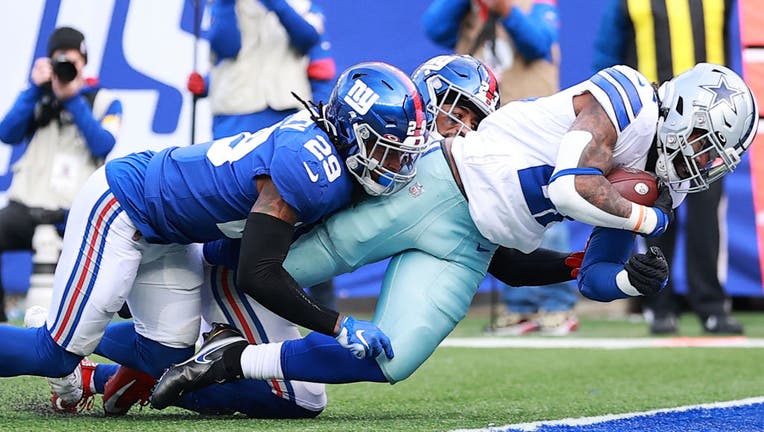 EAST RUTHERFORD, NEW JERSEY - DECEMBER 19: Ezekiel Elliott #21 of the Dallas Cowboys runs the ball for a touchdown during the first quarter against the New York Giants at MetLife Stadium on December 19, 2021 in East Rutherford, New Jersey. (Photo by

EAST RUTHERFORD, N.J. (AP) - Defensive end DeMarcus Lawrence forced a fumble and made two other big plays that led to 15 points and the NFL-East leading Dallas Cowboys inched closer to their first playoff berth since 2018 with a 21-6 win over the error-plagued New York Giants Sunday.

Dallas would clinch a playoff berth later Sunday with a loss or tie by New Orleans or a loss by San Francisco.

This game was not as close as the score. Dallas has four takeaways in three straight games for the ninth time in team history, and the first since 1994. The Cowboys never trailed and the Giants never looked threatening against a defense that also got interceptions from Jourdan Lewis and Malik Hooker.

Lewis' pick came after Lawrence hit Glennon as he was throwing. It led to Elliott's TD run on a draw. Prescott's 1-yard TD pass to Dalton Schultz capped a short third-quarter drive that started after Lawrence and Neville Gallimore stuffed Glennon on a fourth-and-1 sneak from the New York 29.

Prescott finished 28 of 37 for 217 yards. Schultz caught all eight of his targets for 67 yards.

Sidelined by a broken foot most of the season, Lawrence set up 10 of the 15 first-half points. His hit on Saquon Barkley forced a fumble that Carlos Watkins recovered at the Giants 46 with :41 left in the half. Zuerlein, who missed the extra point after the Elliott touchdown, hit a 27-yard field goal, his third of the half. He also converted from 26 and 42 yards, but missed two extra points kicking into a crosswind.

The Giants' major accomplishment was ending rookie Micah Parsons' run of making a full sack in six straight games. New York also did not get blown out this time; it dropped a 44-20 decision in Dallas on Oct. 10. 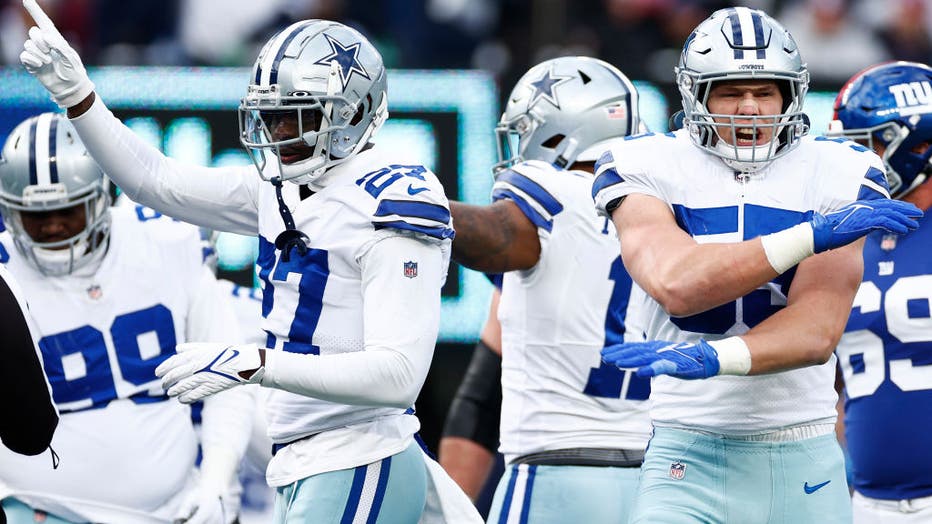 EAST RUTHERFORD, NEW JERSEY - DECEMBER 19: Leighton Vander Esch #55 and Jayron Kearse #27 of the Dallas Cowboys react after a defensive stop during the third quarter against the New York Giants at MetLife Stadium on December 19, 2021 in East Rutherfo

Cowboys: Dallas did not announce any injuries. OT Tyron Smith missed the game with an ankle injury.

Cowboys: return home to play Washington next Sunday for the second time in three games.

Giants: travel down the New Jersey Turnpike to play the Eagles on Sunday.