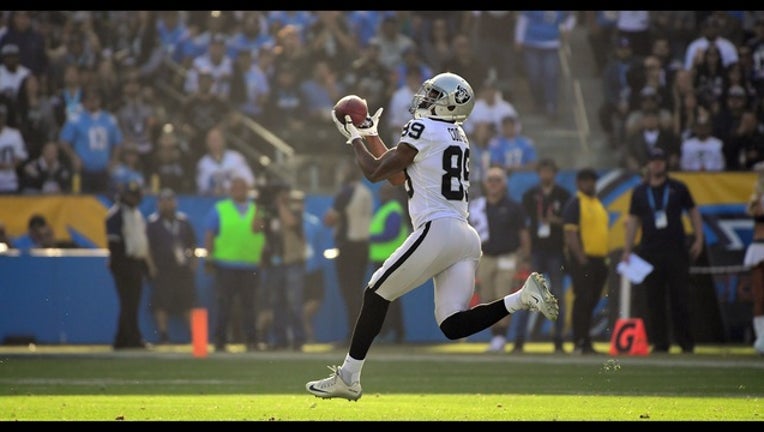 Amari Cooper #89 of the Oakland Raiders makes the 87 yard catch for a touchdown during the second quarter of the game against the Los Angeles Chargers at StubHub Center on December 31, 2017 in Carson, California. (Photo by Harry How/Getty Images)

DALLAS (AP) - The Dallas Cowboys made a bold move for the present Monday, trading a first-round pick for Oakland receiver Amari Cooper in Raiders coach Jon Gruden's latest play for the future.

The Cowboys gave up their top pick in the next draft in hopes of giving quarterback Dak Prescott another weapon just a few months after releasing franchise touchdown catch leader Dez Bryant in a cost-cutting move.

Dallas (3-4) has struggled to score points while losing all four road games, including 20-17 Sunday at Washington . And Cowboys receivers haven't made many big plays in their first season without Bryant and retired tight end Jason Witten, the club leader in catches.

The Cowboys decided Bryant wasn't worth $12.5 million in 2018 after three subpar seasons since signing a big contract following his only All-Pro year in 2014.

Raiders general manager Reggie McKenzie said Cowboys executive vice president of personnel Stephen Jones called last week to say he'd check in on Cooper on Monday and offered the first-round pick that the Raiders were holding out for before making a deal.

Cooper was the fourth overall draft pick by the Raiders out of Alabama three years ago. He started his career with consecutive 1,000-yard seasons and had two 100-yard games this year, but had just two targets and one catch since the second of those games.

The 24-year-old Cooper - five years younger than Bryant - was placed in the concussion protocol after leaving Oakland's last game against Seattle on Oct. 14.

Dallas receivers have just one 100-yard game combined through seven games, by Cole Beasley in a Week 6 win over Jacksonville. The Cowboys are going into their bye week, and the Raiders are returning from their break to face Indianapolis at home Sunday.

For Gruden, dealing his most accomplished receiver doesn't compare to the preseason trade that sent two-time All-Pro pass rusher Khalil Mack to Chicago. But it is another example of the Raiders (1-5) looking to the future.

Oakland figures to have a good shot at the No. 1 overall pick in 2019, and now has three first-rounders with the Cooper trade.

"This is where we get a great opportunity to build," McKenzie said. "We've got pieces now, but we can really rebuild on what we have. With this group, the coaches that I've got here, knowing where we're heading schematically on both sides of the ball and special teams, we're going to build this thing . we've got the ammunition to build this thing really well."

Cooper was the third receiver started his career with back-to-back seasons with 1,000 yards receiving and 70 catches, following Odell Beckham Jr. and Marques Colston but has been unable to build on that success the past two years.

He has just 70 catches for 960 yards since the start of 2016 as his inconsistency has become a bigger problem. Cooper has been held under 30 yards receiving in 13 of his past 26 games. Cooper has 3,183 yards and 19 touchdowns in three-plus seasons.

The Raiders have now dealt two key pieces away from a 12-win team in 2016 and look to be in major rebuilding mode now.

"It's disappointing. Real disappointing," McKenzie said. "It was starting to get that way last year when we somewhat took a nosedive, but I understand the NFL, the system will not allow you to keep them all."

It's not the first time Cowboys owner and general manager Jerry Jones has made a big trade for a former top-10 pick at receiver, and the other two attempts didn't go well.

In 2000, Jones sent two first-round picks to Seattle for Joey Galloway before the first of three straight 5-11 seasons. Galloway, drafted eighth overall by the Seahawks in 1995, didn't have a 1,000-yard season in four years with the Cowboys.

About this time 10 years ago, the Cowboys got Roy Williams from Detroit for three draft picks, including a first-rounder. The former Texas standout's first full season with Dallas was his best, with 596 yards receiving and seven touchdowns.

The Cowboys made the playoffs once in two-plus years with Williams, in 2009, when they won the franchise's first postseason game since the last of five Super Bowl victories following the 1995 season. Williams was drafted seventh overall by the Lions in 2004.