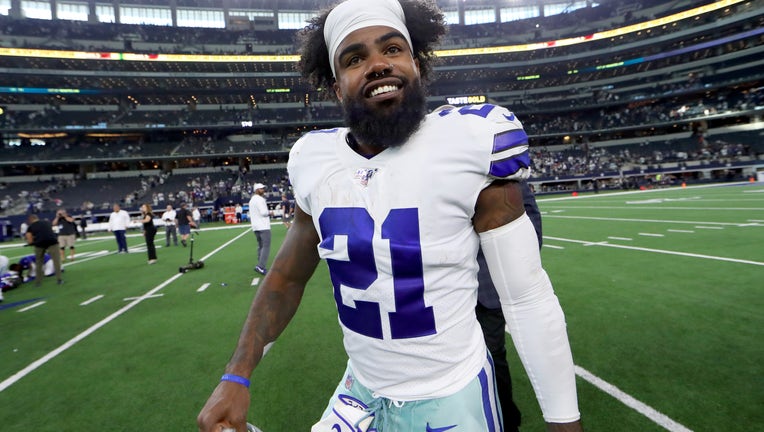 Ezekiel Elliott #21 of the Dallas Cowboys runs off the field after the Cowboys beat the New York Giants 35-17 at AT&T Stadium on September 08, 2019 in Arlington, Texas. (Photo by Tom Pennington/Getty Images)

FRISCO, Texas - Ezekiel Elliott is used to twice the load he carried in the opener for the Dallas Cowboys after the star running back missed the entire preseason in a holdout.

The two-time rushing champion says he never had a moment in the 35-17 win over the New York Giants where he felt he wasn't quite ready for game speed, and Elliott isn't the type to say he would prefer another incremental step to a full workload at Washington (0-1) on Sunday.

"I think I'm ready now for a normal workload," Elliott said Wednesday. "It just depends on how ... (the coaches) are feeling on Sunday. But if they ask, I'll be able to go out there and do it."

There were a few moments against the Giants when Elliott didn't look quite like himself, including in the third quarter on a 2-yard run when there appeared to be room for more. Not long after, though, Elliott had a seam on the left side and took his final carry 10 yards for a touchdown.

Elliott, who averaged 25 touches per game during his first three seasons, had 13 carries for 53 yards and one catch for 10 against New York while playing 54% of the snaps (37 of 68).

His first practice was four days before the game.

"I thought he did a really good job in the game," coach Jason Garrett said. "There's no question he kept himself in really good shape. His weight was good. And for the time that he missed, I thought he handled the work really well."

But it was the first time Elliott had played without any practice in training camp.

"It was a little weird jumping right into things, not having camp and having to adjust," he said.

The Cowboys had the luxury of sitting Elliott the entire fourth quarter because his TD gave Dallas a 35-10 lead late in the third. Rookie Tony Pollard had just 13 yards on nine carries in the fourth and finished with 24 yards on 13 rushes.

"I think I could have been in there a little bit more," said Elliott, whose 14 touches were just one more than his career low. "But we had a certain plan and we're going to keep taking steps toward it."

Garrett probably won't offer much insight into that plan before the Cowboys play the Redskins.

"We'll just see how he practices, see how he comes out of the game," Garrett said the day after the New York game.

Elliott said his soreness was "tolerable," and that the process to get himself in game shape continues.

"Just getting as many full speed football looks as you can," Elliott said. "It's kinda hard to simulate in practice, but I'm doing everything I can on my end to put myself in those football situations and get used to them."

NOTES: WR Tavon Austin missed practice Wednesday because of concussion symptoms. ... DE Tyrone Crawford also was out as he manages a hip issue from the offseason. Crawford played 43% of the snaps against the Giants.