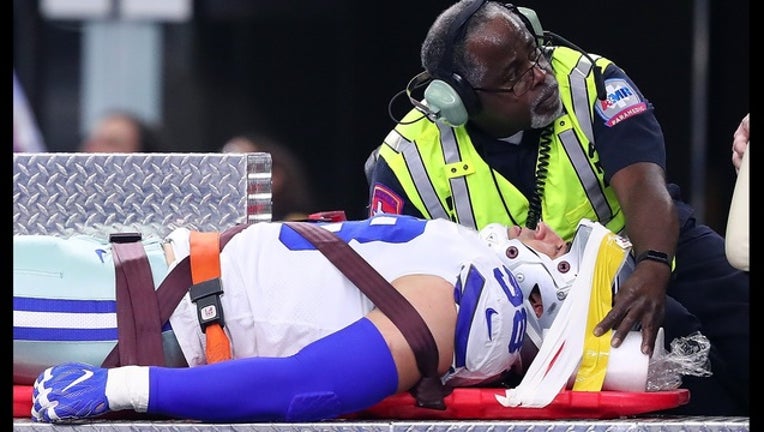 ARLINGTON, TEXAS - DECEMBER 23: Tyrone Crawford of the Cowboys is carted off field in the 1st quarter of a football game against the Tampa Bay Buccaneers at AT&T Stadium on December 23, 2018 in Arlington, Texas. (Photo by Tom Pennington/Getty Ima

Crawford injured his neck on the second play of the game. His neck was stabilized on a stretcher with his facemask removed, and the seventh-year player was moving his arms and legs before he was taken off the field.

He was taken to a hospital, and the Cowboys said after the game that Crawford was released and would be re-evaluated Monday by the team's medical staff.

Dallas wasn't the only playoff-bound team to get hit by an injury on Sunday.

New England wide receiver Cordarrelle Patterson left with a knee injury in the third quarter of the Patriots' AFC East-clinching victory over the Buffalo Bills. Patterson was expected to play a bigger role in the offense with deep threat Josh Gordon suspended indefinitely.

For the Bills (5-10), linebacker Julian Stanford exited with an ankle injury and wide receiver Deonte Thompson left with a toe injury.

The NFL-best New Orleans Saints clinched the NFC's top seed by beating the Pittsburgh Steelers but lost one of Drew Brees' protectors when left tackle Terron Armstead was hurt in the first half and left for good in the second half. Armstead, who tore a pectoral muscle earlier this season, was seen clutching his chest.

Linebacker Vince Williams left in the second half for the Steelers, whose playoff hopes took a big hit.

Philadelphia Eagles left tackle Jason Peters injured a quad on the first possession of Philadelphia's wild 32-30 win over the Houston Texans. AFC South-leading Houston later clinched a playoff berth with Pittsburgh's loss, and the Eagles still have a chance to make the playoffs next week.

The Indianapolis Colts managed to rally for a win over the New York Giants that kept their playoff and AFC South title hopes alive, even with first-half injuries that knocked center Ryan Kelly (neck) and Pro Bowl tight end Eric Ebron (concussion) out of the game. In the third quarter, Colts cornerbacks Kenny Moore III and Quincy Wilson walked off on successive plays with undisclosed injuries.

Two cornerbacks were hurt for the Minnesota Vikings: Marcus Scherels (foot) and Xavier Rhodes (groin). Fullback C.J. Ham hurt an elbow for the Vikings, who beat the Lions and put themselves in position to earn a playoff spot with a win next Sunday.

Seattle's banged up offensive line saw J.R. Sweezy go down with an ankle injury in the second quarter and he did not return to the Seahawks' 38-31 win over Kansas City. Chiefs' running back Darrel Williams suffered a hamstring injury in the first half and did not return.

Dolphins reserve defensive tackle Ziggy Hood injured a hamstring in a loss to the Jaguars that eliminated Miami from playoff contention. For Jacksonville, tackle Josh Wells left in the second quarter with a concussion.

Bengals linebacker Vontaze Burfict left late in the first half with a concussion in Cincinnati's loss to the Cleveland Browns. Starting cornerback Dre Kirkpatrick hurt his right shoulder.

For the Falcons, running back Tevin Coleman left with a groin injury in the second half and did not return with Atlanta leading Carolina by two scores. Panthers Pro Bowl guard Trai Turner left with an ankle injury in Carolina's loss, which ended its slim playoff chances.