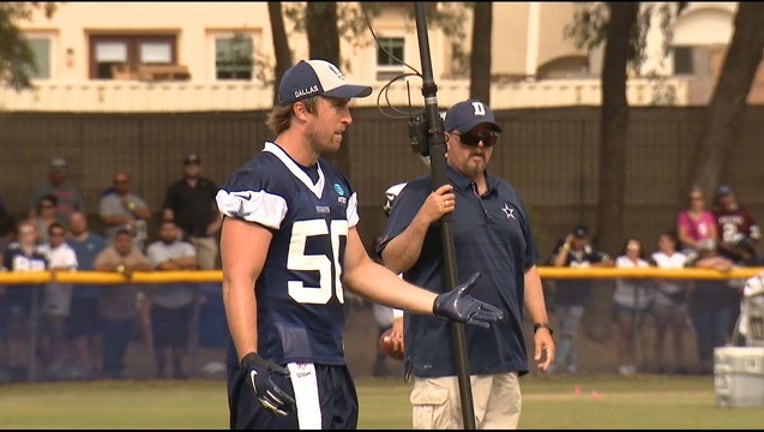 The club is in no rush to get either veteran back on the field.

Martin was injured during the third padded practice, and an MRI a day later revealed some irritation in a disk. Coach Jason Garrett indicated it was unlikely the three-time All-Pro would return before the preseason opener Saturday at San Francisco.

"Give it some time to calm down a little bit and hopefully be back sooner than later," Martin said Sunday. "I'm definitely a guy who's better when he gets reps. So that's why I'm trying to get back as soon as possible."

Lee's role has diminished with the emergence of young linebackers Jaylon Smith and Leighton Vander Esch. But Lee has been working with special teams while also technically still a starter alongside the pair of budding stars.

Lee appears closer to a return than Martin because he did some special teams work in the morning walkthrough before Sunday's practice. Lee said he sprained his right medial collateral ligament when his leg was rolled up on a play in the first padded practice last Monday.

The 33-year-old Lee has missed at least one game because of injury in all but one of his nine seasons. The exception was 2016, Lee's only All-Pro year.

"It's obviously frustrating," Lee said. "But I am mature of now to look ahead and not let the frustration mess with my preparation. Continue to look at the practices ahead of me and the goals ahead of me."

Receiver Amari Cooper was held out of practice for a second straight day Sunday with a bruised heel. Garrett wouldn't rule Cooper out of practice earlier in the day, so the injury isn't considered serious.

"He was moving around fine during the walkthrough so we'll see how the day progresses," Garrett said. "If he doesn't practice today we're off tomorrow then hopefully we can get him back out there on Tuesday."

Guard Cody Wichmann has a calf injury that Garrett could sideline him for a while. The Cowboys have three starters on the physically unable to perform list: defensive linemen DeMarcus Lawrence (shoulder surgery) and Tyrone Crawford (hip) and cornerback Byron Jones (hip).