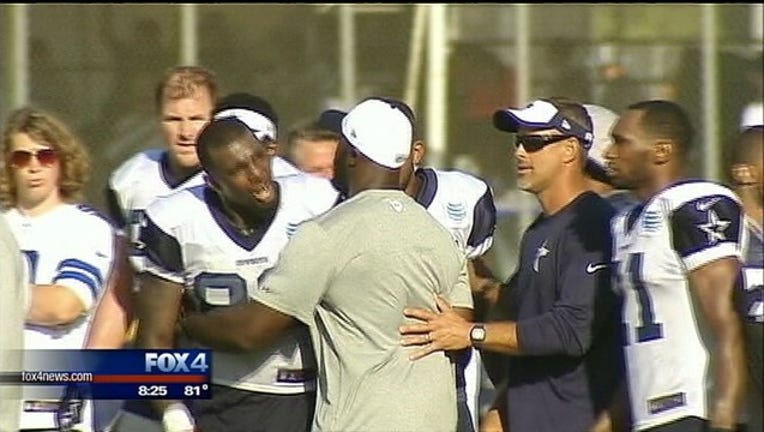 Bryant, who has a history of sideline antics that include screaming at coaches and teammates, threw something at Patmon and later appeared to take a swing at him after the two tangled during a play in 11-on-11 work late in the practice Sunday.

The incident started when Patmon jarred Bryant's helmet loose during a play and Bryant responded by yanking off Patmon's helmet. Patmon threw a punch and backed away, and Bryant came back with a wild left hook before teammates separated them. The Cowboys posted video of the exchange on their website.

Tight end Jason Witten was among those who couldn't get Bryant to walk away. Romo eventually came over and got Bryant to move to a different part of the sideline, while Patmon stood with players and other team personnel nearby.

Bryant, the biggest star in this camp because he recently signed a five-year, $70 million contract that ended his threat not to show up, said he and Patmon exchanged words for several plays before the skirmish that had several teammates trying to separate them.

When practice ended a few minutes later, coach Jason Garrett spoke briefly to Bryant, who then walked over to Patmon and hugged him while fans nearby cheered after earlier yelling at Bryant to calm down.

"I got a little bit overheated," Bryant said. "At the end of the day, that's something that you really need for a team, on a team. I'm just trying to win ballgames."

Cowboys owner Jerry Jones, who had already left the practice field, wasn't bothered by the display. He said he caught footage of it on television and said, "Man, you'd have thought it was CNN featuring some big event going on."

Jones also noted that it was just the second padded practice in front of a second straight bigger weekend crowd. The Cowboys drew 3,727 Sunday after the first padded workout Saturday brought in 5,802 fans.

Patmon is an undrafted second-year player still fighting for a roster spot a year after making the team with a strong camp and preseason. He played in 11 games and both of Dallas' playoff games.

Both players went to Oklahoma State.

"Oh, man, it's just brothers," Patmon said. "Brothers fight. That happens sometimes. We go at it. After that we squash it and it's over."

Bryant, days removed from talking about the growth and maturity that led to his huge payday, bristled at the notion that he remains a focal point because of several sideline incidents. Besides ranting at teammates and coaches, Bryant also left the field before the clock ran out in a particularly painful loss to Green Bay two years ago.

"All I can say is have I ever missed a game?" said Bryant, who initially left the field without stopping for reporters but came back and answered questions after he had taken off his uniform. "All right then. So I don't even know why you asked me that question."

Bryant said Garrett told him "he wasn't going to get in between it and all of that."

"Because he knows the kind of guy I am," Bryant said. "This kind of stuff happens. I just hate the fact that when it's me, I know that I can get kind of animated with everything. That's why a lot of focus is on me. It's really good for the team."

And Bryant, a first-round draft pick in 2010, also acknowledged that Patmon is an unsung player battling for attention.

"You don't want somebody weak on your team," Bryant said. "He's fighting his way and he's fighting for respect. And he's got mine then. You can go to war with a guy like that any day of the week."

Both players will have an extra day to cool off. Dallas takes a break Monday before returning to practice Tuesday.