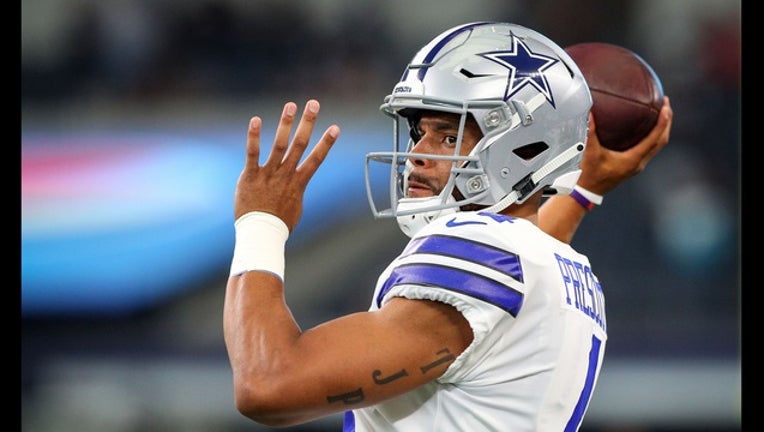 ARLINGTON, TX - AUGUST 26: Dak Prescott #4 of the Dallas Cowboys warms up before the preseason football game against the Arizona Cardinals at AT&T Stadium on August 26, 2018 in Arlington, Texas. (Photo by Richard Rodriguez/Getty Images)

HOUSTON (AP) - Houston star J.J. Watt knows how important Sunday night's game against the Dallas Cowboys is to fans of both teams.

But the way the Texans' season has gone so far, Watt isn't concerned about the significance of this in-state rivalry and is simply worried about helping his guys turn things around.

"I'm sure there's definitely something there for the fans on both sides, but ... they could be lining up anybody over there," Watt said. "We need to win this game."

The Texans (1-3) got their first victory last week in overtime against the Colts after opening the season with three straight losses. The Cowboys (2-2) haven't fared much better and picked up their second win on Sunday against the Lions.

This game tends to be hyped more because these teams meet so rarely. Sunday will be the fifth time between these teams and the first since 2014. The Cowboys have won the last three, with Houston's only win coming in the franchise's first game in 2002.

While Watt really didn't want to get into the rivalry aspect of this game, quarterback Deshaun Watson talked about what a win over Dallas would mean to the city.

"This is pretty much the battle of Texas," Watson said. "Two Texas teams and Houston wants to beat Dallas and have the bragging rights. So, we have to go out there and do our job and try to get those bragging rights so the whole city of Houston can hold that weight for a year."

To do that the Texans will have to slow down running back Ezekiel Elliott, who leads the NFL with 426 yards rushing. He had a season-high 29 touches for a career-high 240 yards from scrimmage in the win over Detroit.

The 25 carries were by far the most this season and it's what he expects every week - not the 16-carry average from the first three weeks when the Dallas offense was spotty at best.

Some things to know about Sunday's game between the Cowboys and Texans:

Defensive lineman David Irving was activated by Dallas after starting the season on a four-game suspension for the second straight year. But the club said he didn't make the trip because of an excused absence for personal reasons and wouldn't make his season debut.

Irving had six sacks in his first four games coming off last year's suspension. He finished with seven sacks in eight games before a concussion sidelined him for the final four games.

The fourth-year player practiced for the first time since last November, but missed the two days for personal reasons.

Watt has returned to form this season after playing just eight games over the previous two seasons because of back surgery and a broken leg. He's tied for first in the NFL with four forced fumbles and his five sacks are tied for second.

"Two elite players. They can really disrupt a game, can affect everything you are trying to do in the run game and the passing game," Garrett said. "Hard to block those guys one on one. You have to have a plan for them. Again, most teams have a plan for them and typically they show up anyway."

While Clowney and Watt have led Houston's defense, the Cowboys have one defensive end leading their group in DeMarcus Lawrence. He leads the NFL with 5 1/2 sacks and ranks second with eight tackles for losses. He's also recovered a fumble and has 21 tackles.

Houston coach Bill O'Brien raved about his work this season.

"Great length, athleticism. He plays very hard, plays hard on every snap," O'Brien said. "He's chasing the ball sideline to sideline, chasing the quarterback. He can wreck a game."

Watson has been sacked 17 times, second most in the NFL. While Houston's offensive line has been criticized for the number of hits Watson has taken this season, he's quick to point out his lineman shouldn't take all the blame for the sacks.

"A lot of the sacks I put upon me getting rid of the ball or holding the ball too long or trying to create a play where I probably could have thrown the ball away or ran for extra yardage - two or three yards," he said. "But, those guys are doing a heck of a job and ... they're improving, building chemistry, enjoying the game, having fun and just getting better every week."