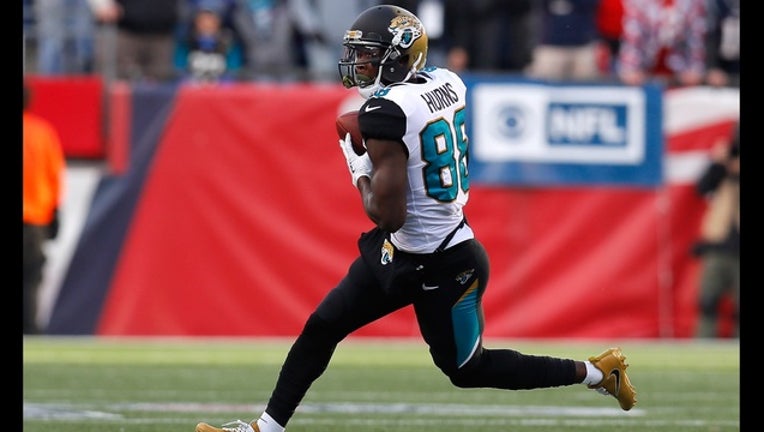 Allen Hurns of the Jacksonville Jaguars carries the ball in the first quarter during the AFC Championship Game against the New England Patriots at Gillette Stadium on January 21, 2018 in Foxborough, Massachusetts. (Photo by Kevin C. Cox/Getty Images)

Hurns' deal with the Cowboys came three days after he was released by the Jacksonville Jaguars.

Cowboys receiver Cole Beasley welcomed Hurns to the team in a Twitter message, ending that with "lets go to work!" Hurns responded, "Let's get it bro" on his account.

Hurns initially signed with the Jaguars as an undrafted rookie out of Miami in 2014. He got a $40 million, four-year contract extension after the 2015 season, when he had 64 catches for 1,031 yards and 10 touchdowns in 15 games. But he has since been hampered by injuries.

Hurns missed 11 games because of injuries during the past two seasons with the Jaguars, who last week brought back receiver Marqise Lee and added Donte Moncrief in free agency.

In his four seasons with the Jaguars, Hurns had 189 receptions for 2,669 yards and 21 TDs. He caught just 74 passes for 961 yards and five scores the past two years while dealing with a sports hernia in 2016 and a high ankle sprain in 2017.