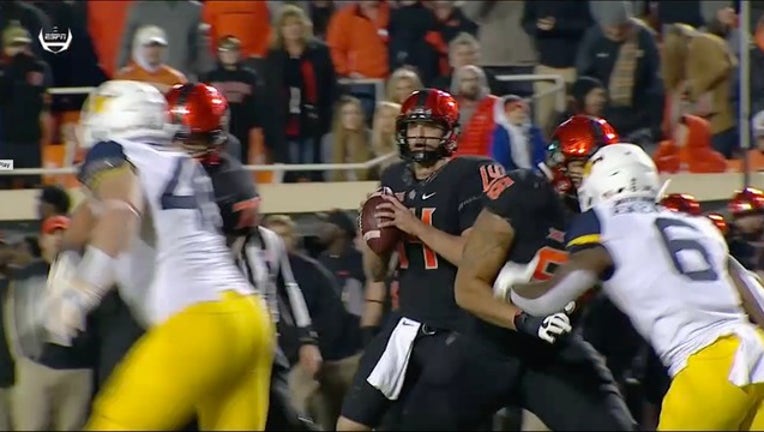 STILLWATER, Okla. (AP) - Taylor Cornelius passed for 338 yards, ran for 106 more and threw a touchdown to Tylan Wallace with 42 seconds remaining to rally Oklahoma State past No. 7 West Virginia, 45-41, on Saturday.

West Virginia quarterback Will Grier led the Mountaineers down to the Oklahoma State 14-yard line but couldn't connect with David Sills V on the final play. The loss all but ended West Virginia's shot at the College Football Playoff and put a dent in Grier's Heisman Trophy campaign.

Oklahoma State now has Top 25 wins over Boise State, Texas and West Virginia this season. The Cowboys won despite leading rusher Justice Hill sitting out with a rib injury.

West Virginia: The Mountaineers wasted a major opportunity and now don't have quite as much to play for against Oklahoma.

Oklahoma State: Cornelius made up for two interceptions earlier in the game with a strong fourth quarter.

West Virginia will likely drop out of the Top 10 after the loss.