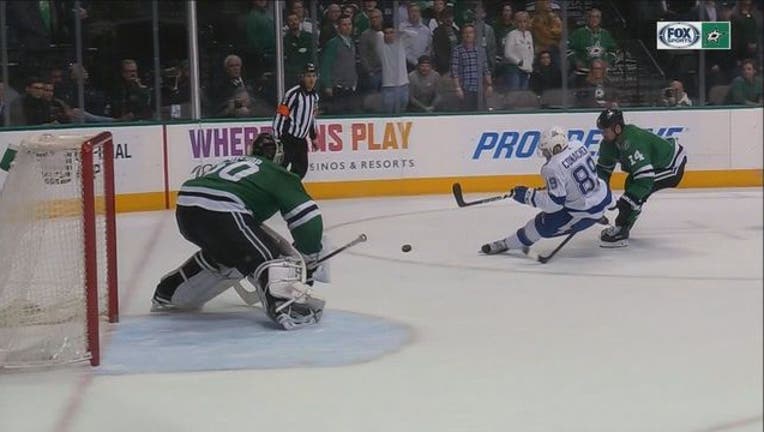 Conacher broke away from Dallas' Jamie Benn and slid the puck between goalie Ben Bishop's legs.

It was the Lightning's fourth game in six nights that went past 60 minutes.

Tampa Bay's Anthony Cirelli had a goal and an assist in the three-goal second period of his NHL debut. The Lightning recalled the 20-year-old Cirelli from Syracuse of the AHL earlier Thursday as an emergency replacement for NHL scoring leader Nikita Kucherov.

Tyler Seguin had two goals and an assist for Dallas, which rallied with two third-period goals.

Mattias Janmark had tied the game with four seconds left in regulation, when he lifted a shot from a scramble over fallen Tampa Bay goalie Louis Domingue.

Brayden Point and Steven Stamkos also scored for the Lightning.

Tampa Bay's J.T. Miller had two assists. The first came just 1:02 into the game. Miller picked up a loose puck behind the net and passed to Point at the right of the net. Bishop was tangled up with a teammate, and Point slipped a wrist shot behind the goalie.

Dallas tied the game at 1 on the game's first power play. Jamie Benn passed from the right faceoff circle to Seguin in the slot. His snap shot grazed the crossbar and went in at 11:05.

For Seguin's second goal, John Klingberg skated low into the right circle and passed across. Seguin had the left side of the net empty for his snap shot at 8:13 of the second period.

The spotlight then shifted to Cirelli. He skated around Klingberg for a shot into the upper left corner to tie the game at 9:20. Four minutes later, Killorn poked in the rebound of Cedric Paquette's shot that Bishop couldn't handle. Cirelli also received an assist.

Stamkos got behind Dallas' defense to take a long lead pass from Miller and beat Bishop.

After being outshot 13-6 in the first period, the Lightning dominated the second with a 13-6 advantage.

NOTES: Cirelli, a first-year pro, had 14 goals and 37 assists in 51 games for Syracuse. . The Lightning played without Kucherov and D Ryan McDonagh. Both have upper-body injuries. . Miller was in his second game with Tampa Bay after the Rangers traded him and McDonagh. . Seguin has scored in four straight games, with a power-play goal in the last two. He leads the Stars with 34 goals and 11 on the power play. . Jason Dickinson had his first assist in his 25th NHL game on Ritchie's goal. . The Lightning have the most points in the NHL standings, and will be home for 12 of the final 17 games. . The Stars will play 11 of their final 18 on the road.

Lightning: Begin a season-high eight-game homestand on Saturday against Philadelphia.