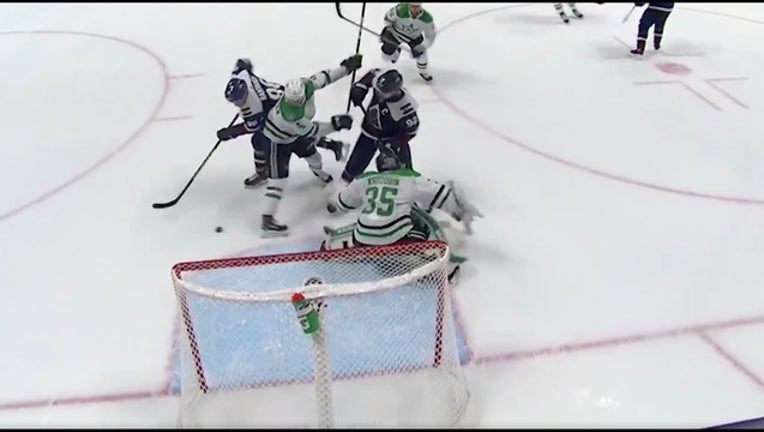 Rantanen also had an assist, and Nathan MacKinnon had a goal and an assist for the Avalanche. Colorado has won four in a row and is 6-0-1 in its last seven games.

Rantanen leads the NHL in points (38) and assists (28), while MacKinnon is second in points with 35.

Radek Faska and Jamie Benn had goals, Alexander Radulov had two assists and Anton Khudobin stopped 33 shots for the Stars. Dallas has lost three of its last four and couldn't get a win in coach Jim Montgomery's return to Denver. Montgomery coached Denver University for five seasons and led the Pioneers to the 2017 national championship.

Colorado got the tiebreaker when Rantanen knocked in Erik Johnson's rebound at 18:03 of the third period for his 10th goal. Semyon Varlamov stopped a furious rally in the crease in the final seconds and finished with 27 saves.

The Avalanche scored after Dallas killed off the first of two Colorado power plays in the second period. Gabe Landeskog controlled the puck down low and floated a pass to Rantanen at the bottom of the right circle. Rantanen sent a pass to the other side of the crease to MacKinnon, who beat Khudobin on the short side at 13:11.

It was his 15th of the season.

NOTES: Compher has three goals in the last two games after missing 16 games with a head injury. ... The Avalanche hosted two survivors of the bus crash in April that killed 16 members of the Humboldt Broncos of the Saskatchewan Junior Hockey League. Defenseman Ryan Straschnitzki and goaltender Jacob Wasserman were honored before the game and participated in the ceremonial puck drop. ... Colorado forward Sven Andrighetto was a healthy scratch for the second straight game. He played in three games after missing six with an injury.