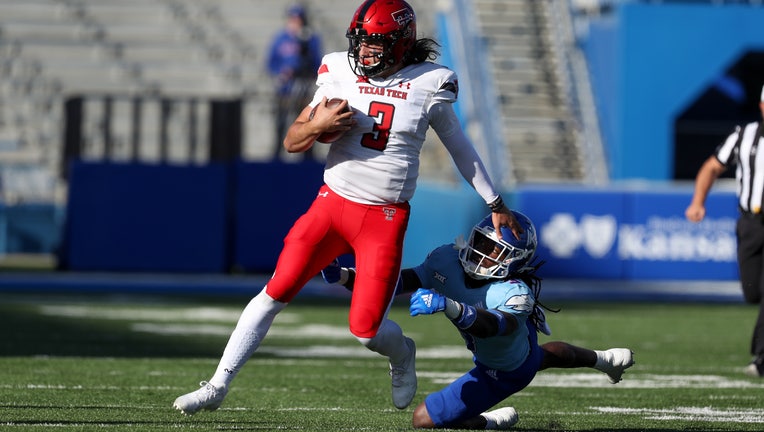 LAWRENCE, Kan. (AP) - Henry Columbi thew for a touchdown, ran for another as Texas Tech had four rushing touchdowns in a 38-7 win over Kansas on Saturday afternoon.

The past two seasons combined, this matchup had been decided by a total of six points. Texas Tech showed this year there's still a big difference between the programs. The Raiders held Kansas to 20 passing yards and only four first downs in the first half.

Texas Tech had 438 yards with 244 of those coming on the ground. Sarodorick Thompson ran for 83 yards and Ezukanma had 76 receiving yards.

The Red Raiders were spectacular on third downs going 9-for-11 and held Kansas to 5-for-13. They were also a perfect 6-for-6 in the red zone and Kansas was 2-for-2.

One bright spot for Kansas happened in the final minute when they scored two touchdowns. Miles Kendrick relieved Bean at quarterback and found Grimm for a 14-yard touchdown pass and then Lawrence Arnold for a 13-yard touchdown. Kendrick went 4-for-7 for 48 yards in the final drives of the game.

The Jayhawks forced two turnovers and committed one.

Kansas: The Jayhawks have been competitive against the Red Raiders recently, but were outmatched this season. Their last conference win was against Texas Tech two years ago.

Texas Tech: The Red Raiders dominated from the first possession and are now just one win away from being bowl eligible.

Texas Tech hosts Kansas State while Kansas stays at home to take on Oklahoma next Saturday.