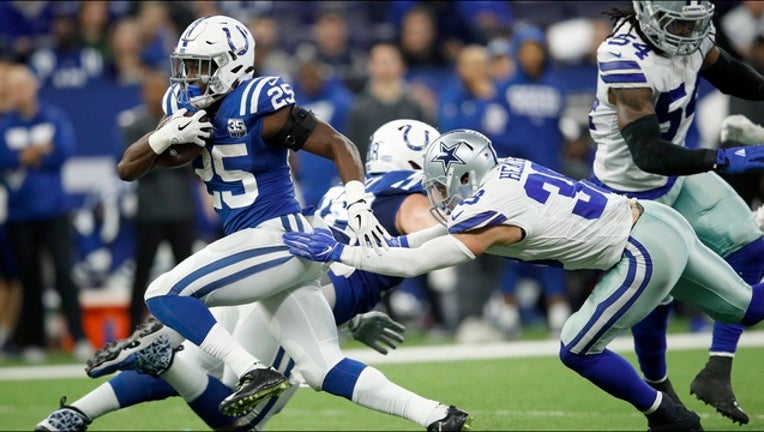 Marlon Mack #25 of the Indianapolis Colts runs the ball in the game against the Dallas Cowboys in the third quarter at Lucas Oil Stadium on December 16, 2018 in Indianapolis, Indiana. (Photo by Joe Robbins/Getty Images)

INDIANAPOLIS (AP) - Indianapolis Colts running back Marlon Mack kept his eyes down the field and his legs churning Sunday.

His teammates took the cue.

The offensive line created enough space for Mack to run for a career-high 139 yards and two scores, an improving defense smothered the league's hottest offense and the Colts rolled past Dallas 23-0 to stay in the AFC playoff hunt.

If Mack continues to exploit the creases, there's no telling what the Colts (8-6) could do if they earn a postseason trip.

Since losing five of their first six, Indy has won seven of eight. Andrew Luck continues to play the best football of his career and Mack appears ready to thrive with starting center Ryan Kelly back in the lineup.

The Colts' vastly improved defense has allowed 27 points over the past three weeks including two games against division leaders, Houston and Dallas, and has its first shutout since a 27-0 victory over Cincinnati on Oct. 19, 2014.

"Against that team, with the guys they have, it's tough," coach Frank Reich said. "They have some of the best (offensive) guys in the NFL."

While the Colts (8-6) celebrated, Dallas was dismayed.

The Cowboys (8-6) came out flat on offense, wore down on defense and failed to clinch the NFC East title as a five-game winning streak ended.

Ezekiel Elliott ran 18 times for 87 yards and caught seven passes for 41 yards. Amari Cooper had four catches for 32 yards and Dak Prescott was 24 of 39 for 206 yards with one interception.

But Mack set the tone with a physical 19-yard run on his first carry, ran 22 times and matched his career best for scoring runs - all against the league's No. 3 run defense.

"Obviously, we didn't play well enough in any phase of our game to win," Cowboys coach Jason Garrett said. "We can't allow them to run the ball the way they want to run it."

That wasn't the only problem.

When Denico Autry blocked a Dallas field-goal attempt , Mack capitalized with a 1-yard TD plunge. Luck cashed in on a defensive holding call against Anthony Brown on third down to set up Adam Vinatieri for a 43-yard field goal to make it 10-0 at the half.

Mack opened the second half with a 6-yard scoring run and Vinatieri sealed it with two more field goals.

Defensively, the Colts made big play after big play, too.

Elliott lost 2 yards and the ball on fourth-and-1 from the Colts 3, Dallas was knocked out of field-goal range on Tyquan Lewis' sack on the Cowboys' final chance in the first half, Pierre Desir and Darius Leonard each ended drives by breaking up passes in the second half and George Odum capped it with a late interception.

Mack took care of the rest.

"He ran well, he does all the little things really, really well," Luck said.

Cowboys: Dallas lost its first game in the series since 2002 and finished with no sacks and only three quarterback hits. ... The Cowboys finished with 292 yards, their lowest total since acquiring Cooper in a trade.

Colts: Luck was 16 of 27 for 192 yards while T.Y. Hilton caught five passes for 85 yards despite not practicing all week because of an ankle injury. ... Lewis had two of the Colts three sacks.

Cowboys: Right guard Zack Martin missed the first game of his career with an injured left knee. Dallas improvised by moving left guard Connor Williams to right guard and inserting Xavier Su'a-Filo at right guard. But Su'a-Filo left early in the second quarter with an eye injury and did not return.

Colts: Veteran backup Joe Haeg replaced right guard Mark Glowinski (ankle) in the starting lineup and defensive tackle Al Woods left in the third quarter with an injured leg and did not return.

Colts: "Zeke doesn't get stopped too much in that situation," Reich said of the goal-line stand. "I don't know what the numbers are but it was a huge play."

Cowboys: Get a second chance to clinch the division title next Sunday when they host Tampa Bay.

Colts: Close out their home schedule next weekend when Eli Manning and the New York Giants return to Lucas Oil Stadium for the first time since winning the Super Bowl after the 2011 season.