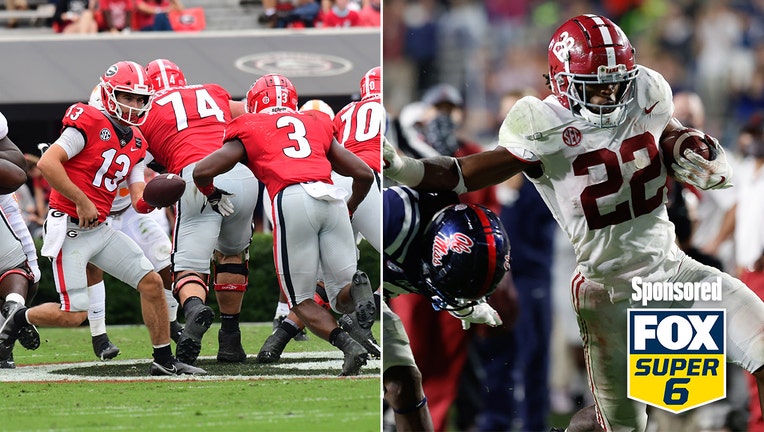 LEFT: Stetson Bennett #13 of the Georgia Bulldogs hands off the ball against the Tennessee Vols on Oct. 10, 2020. (Photo by Perry McIntyre/Collegiate Images/Getty Images). RIGHT: Najee Harris of the Alabama Crimson Tide runs the ball upfield against

Over the past few seasons, Georgia and Alabama have met in games that have shaped the race for the College Football Playoff. On Saturday night, they will square off again in Tuscaloosa, Ala. in the game that figures to decide the lead candidate from the SEC.

That is the marquee matchup of the weekend in college football and the leadoff game in FOX Bet’s Super 6 contest. Here’s the schedule for Saturday’s top games, including a huge Big XII game that you can see on Fox.

Just download the FOX Super 6 app on your phone, pick all six of the college football games listed and the margins of victory in each. If you do that, you could win the jackpot of $25,000. Just download the app in the Apple Store or Google Play. The best part is it's free!

The Mountaineers are coming off a big 27-21 double-overtime win over Baylor last week to even their conference mark at 1-1. West Virginia has a super sophomore receiver in Winston Wright Jr., who has 15 receptions and a touchdown in three games this season. Junior running back Leddie Brown is averaging 5.1 yards per carry for West Virginia. Meanwhile, Kansas has struggled to get anything going offensively. The Jayhawks are only averaging 14 points a game in their three losses.

Play the FOX Super 6 and make your selection on this Big XII rivalry and the best college football games of the weekend. Pick all of them correctly and you can win $25,000. Play today.

Fresh off a dominating performance over No. 7 Miami, Clemson tries to stay undefeated when they travel to Atlanta to a Yellow Jackets team that they’ve beat the last five times.

The headliners are Clemson’s duo of quarterback Trevor Lawrence and running back Travis Etienne, who could both find themselves in the Heisman Trophy race this season. Meanwhile, Georgia Tech had a nice 46-27 bounce-back win over Louisville after dropping two straight. Freshman quarterback Jeff Sims threw for two touchdowns and rushed for another in that game.

Who will win that battle? If you pick right, you could win up to $25,000 by hitting on the FOX Super 6. Download the app at the Apple Store and Google Play and play for free.

Win up to $25,000 by correctly picking all six games on the Fox Super 6. Get the app at the Apple Store or Google Play. The best part of all is it’s free to play.

The authors of the two biggest upsets in the SEC square off in Starkvegas. The Aggies are fresh off that upset win over Florida last Saturday that was the biggest victory in Jimbo Fisher’s term as head coach in College Station. Meanwhile, the Bulldogs – who beat LSU to start the SEC season- were trounced on the road at Kentucky last week.

The FOX Super 6 app is the place to go for your college football weekend. You could win up to $25,000 if you pick all six games this weekend.

The Eagles are coming off an emotional 31-30 win over Pittsburgh last week that allowed them to start the year 3-1 for the third straight season. Boston College’s offense has been led by Notre Dame quarterback transfer Phil Jurkovich, who has almost 1,200 yards and eight touchdowns passing in four games. Meanwhile, the Hokies struggled defensively in a 56-45 loss at No. 8 North Carolina. The Hokie offense is averaging 42 points a game, but allowing 38 per contest on defense as they’ve played a series of high scoring contests.

Get in the game by downloading the free FOX Super 6 app and you can win up to $25,000 by picking all six college games.

Very few games will have as big an impact on the national championship race in 2020 as this one. Georgia hits the road after two impressive home victories over Top 15 teams in No. 7 Auburn (27-6) and No. 14 Tennessee (44-21). Stetson Bennett has stabilized an uncertain quarterback situation at Georgia, throwing two touchdown passes in last week’s win over the Volunteers. Meanwhile, Alabama survived a scare as a three-touchdown favorite over Ole Miss before pulling away on the road for a 63-48 victory. Running back Najee Harris scored five touchdowns in that game for the Tide, who have averaged 51 points in their three victories.

One of the best weekend slates on the college football schedule is a great reason to sign up for the FOX Super 6. Download the app today and start picking these six games for free, and you could win $25,000.