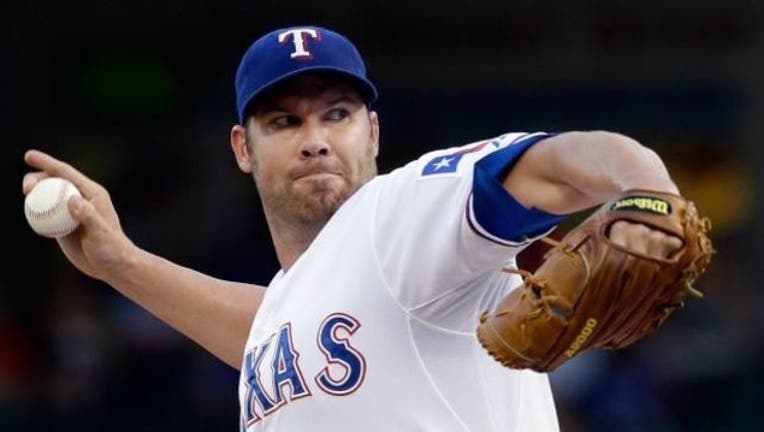 Lewis (14-5) allowed six hits and a walk, but the Rangers defense turned three double plays and threw out another runner at the plate. Shawn Tolleson pitched the ninth for his 24th save, despite allowing Miguel Cabrera's third double of the game.

The game was delayed for several minutes in the eighth inning after a female fan seated in the first row behind the Tigers dugout was hit by a line drive off the bat of Anthony Gose. After lengthy attention from three paramedics, she was taken out of the stadium on a stretcher, wearing a neck brace, but appeared to be conscious and speaking.

Justin Verlander (1-6) took the loss despite allowing two runs — one earned — and four hits with a walk in seven innings. Since July 10, Verlander has allowed one or fewer earned runs in six of his eight starts, but is 1-4.

The Rangers took a 1-0 lead in the second with some help from the Tigers' defense. After Elvis Andrus singled with one out, Rougned Odor hit a hard grounder to first that looked like it would be an inning-ending 3-6-3 double play. Cabrera, though, misplayed the ball, and was only able to get the out at first.

Will Venable followed with an RBI double into the left-center field gap. He ended up on third when Gose couldn't cleanly field the ball, but Verlander struck out Bobby Wilson to end the inning.

Prince Fielder, booed for the second straight night, made it 2-0 with a sacrifice fly in the third inning that was set up when Delino DeShields reached on a bunt single and took third on Verlander's wild pickoff attempt.

Detroit loaded the bases with one out in its half of the third, but Tyler Collins grounded into a double play with Cabrera on deck. Cabrera led off the fourth with a double, but DeShields robbed Victor Martinez with a leaping catch at the wall in right-center field. Nick Castellanos singled with two out, but Venable threw Cabrera out at the plate.

That play was reviewed — Cabrera had originally been called safe — and the same thing happened in the sixth when Cabrera was doubled off second on Martinez's line drive. The second review, which upheld the original call, was 4:57 long, and Ausmus was ejected for arguing the decision.

Rangers: Venable's RBI double was his first hit for Texas after he was called up to replace OF Josh Hamilton (knee). The Rangers have now used an AL-high 54 players this season. Texas set a major-league record last year by using 64 players.

Tigers: LHP Kyle Lobstein made his fourth injury rehab start Thursday, allowing six runs on 12 hits and two walks in 3 2/3 innings. Lobstein, who has been sidelined since May 24 with a shoulder injury, is 0-3 with a 7.24 ERA between Triple-A and Single-A.

The teams play the third of a four-game series Saturday with Texas' Yovani Gallardo (9-9, 3.39) facing Detroit's Randy Wolf on Wolf's 39th birthday. Wolf, acquired by the Tigers this week in a minor-league deal with Toronto, will be making his first major-league start since June 14, 2014 and just his fifth since 2012.

For the second time this season, former Tigers player and manager Alan Trammell filled in as the first-base coach. The first time, he wore No. 4 to avoid conflicting with Ian Kinsler, who now wears the No. 3 that Trammell wore for 19 seasons as a player and three more as manager. This time, though, Trammell and Kinsler both wore No. 3.