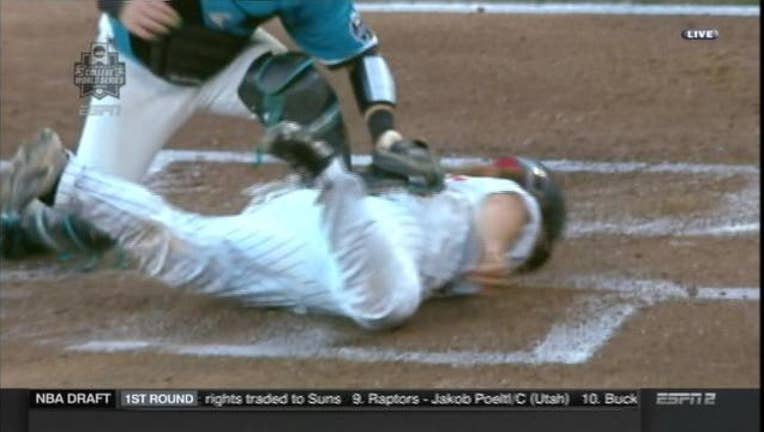 The Chanticleers got a big boost offensively from an unlikely source, and they capitalized on Texas Tech's struggles in the field to beat the Red Raiders 7-5 on Thursday night in a College World Series elimination game.

The Raiders, at No. 5, were the third and final national seed knocked out of the NCAA Tournament, and the second by Coastal Carolina. The Chanticleers swept No. 8 LSU on the road in super regionals, and they beat No. 1 Florida in their CWS opener.

"If you had told me we would be where we're at right now four months ago, two months ago, maybe three weeks ago, I'm not sure I would have laid a whole lot of money on it by any means," coach Gary Gilmore said.

The Chanticleers (51-17) now move to the Bracket 2 final on Friday night against TCU.

Light-hitting David Parrett played a huge role in getting them there, driving in three runs in his first CWS start.

"The mindset for today was that it's a one-game season. That's what it came down to," Parrett said. "This group of guys, we don't want to say goodbye to each other yet. Tomorrow's another one-game season, so we're excited about that."

Coastal Carolina converted three Texas Tech errors into six unearned runs. The Red Raiders (47-20) committed seven errors in three CWS games, and seven of the 12 runs against them were unearned.

"Kind of shocked over some of that stuff," Tech coach Tim Tadlock said. "We hadn't done that in a long time. It was uncharacteristic of our team. Throughout the year, we played pretty good defense and pitched it pretty well, and we really probably just gave them too many of what you call unearned runs."

Mike Morrison (8-1) pitched a season-high 4 1/3 innings of relief for the win, and Bobby Holmes earned his fourth save. Erikson Lanning (3-4) took the loss.

Morrison, who relieved freshman Jason Bilous with one out in the third inning, is usually the Chanticleers' closer. He didn't give up a run until Hunter Hargrove's sacrifice fly and Michael Davis' RBI single pulled the Raiders to 7-5 in the seventh.

Holmes struck out pinch hitter Ryan Long to end the seventh and got out of the eighth when, with two men on, he knocked down Tyler Neslony's hard comebacker and got the ball to first just in time. He pitched a perfect ninth.

Morrison said he and Holmes were willing to pitch as much as necessary to keep the season alive.

"I gave everything I had, and Bobby picked me up like he did all year," Morrison said. "That's kind of been our thing, where whether it's him before me or me before him. We'll pick each other up."

Parrett, a senior who played his junior-college ball 10 minutes away from TD Ameritrade Park at Iowa Western in Council Bluffs, came into the game batting .130 with 10 RBIs. With the left-handed Lanning starting for Texas Tech, the right-handed batting Parrett drew the start at catcher in place of Matt Beaird.

Parrett singled in a run in the second inning off Lanning and two more in the fifth off lefty Parker Mushinski.

"He's had one of those seasons up until today you kind of want to forget about, compared to what he did last year," Gilmore said. "If there's a way that the game events itself out over a season or whatever, he's had a couple moments here and there down the stretch. And today was the crowning moment."

Coastal Carolina has won 17 of its last 19 games and has 51 wins, second most in the country behind Florida's 52. The Chanticleers are the first team to debut at the CWS and earn multiple wins since Vanderbilt won twice in 2011.

Coastal Carolina plays TCU in the Bracket 2 final on Friday night. The Chanticleers would have to beat the Horned Frogs in that game and again Saturday to reach next week's best-of-three finals. Texas Tech's season is over.