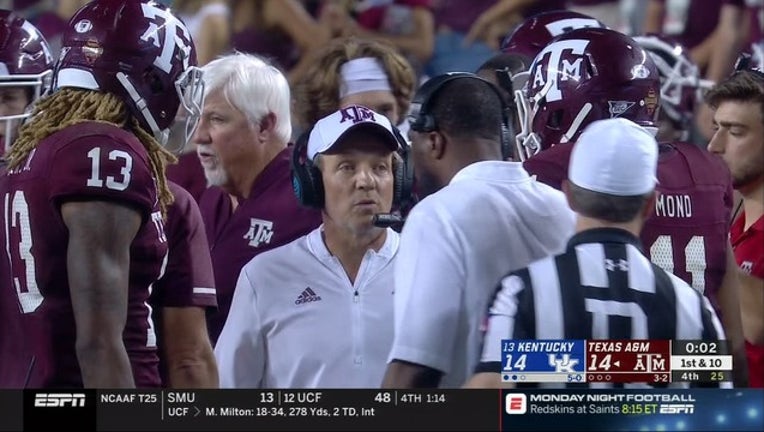 Texas A&M is looking to continue its revival in the SEC when facing the Gamecocks, who have never beaten the Aggies. Texas A&M hopes to break into the top tier of SEC West contenders.

Texas A&M's defensive front vs. South Carolina QB Jake Bentley. The Aggies harassed Bentley and the Gamecocks in a 24-17 victory a year ago with seven sacks and holding them to 128 yards rushing on 35 carries. South Carolina won't have a chance unless than can manage A&M's charge. The Aggies are tied for fourth in the SEC with 16 sacks this season.

South Carolina: WR Deebo Samuel. The Gamecocks senior leads the team with 26 catches, but has not had explosive season many expected with his return from a broken leg. Samuel has three TDs and is eager to make his mark.

Texas A&M coach Jimbo Fisher and South Carolina coach Will Muschamp were coordinators (Fisher on offense, Muschamp on defense) for LSU coach Nick Saban from 2002-2004. That run included a 2003 national championship ... South Carolina DB Nick Harvey played 38 games, starting 13, for Texas A&M from 2014-16. ... Texas A&M is trying for its third straight SEC win, something it has not done in two years. ... South Carolina has allowed just 12 points total in the second half of its past three games. ... Texas A&M leads the SEC and all Power Five schools in time of possession, holding the ball for 35 minutes, 43 seconds on average its first six games. ... The winner of this game claims the Bonham Trophy, named for South Carolina native James Bonham who fought and died in the Battle of the Alamo in 1836.