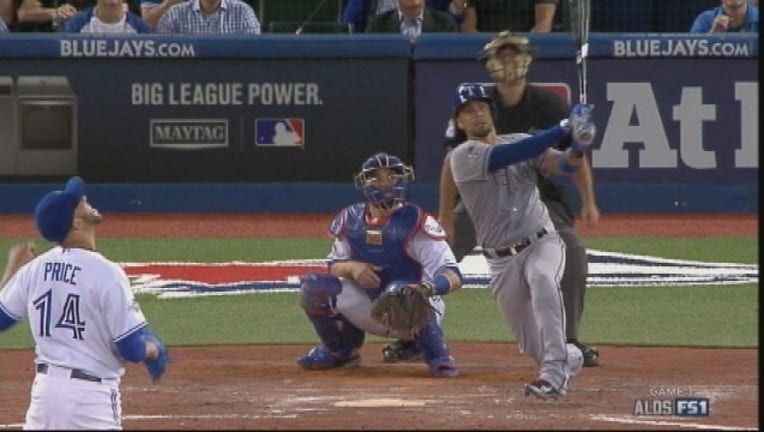 TORONTO (AP) — A big day by the bottom of Texas' batting order helped the Rangers overcome an injury to slugger Adrian Beltre in the start of their postseason run.

Robinson Chirinos hit a two-run homer against David Price, Rougned Odor added a solo shot and the Rangers beat the Blue Jays 5-3 Thursday in their AL Division Series opener as postseason baseball returned to Toronto for the first time in 22 years.

"It means a lot to the team to come to Toronto and win that first game against a great pitcher," Chirinos said.

Both starting third baseman left with injuries: Beltre came in the third with a strained muscle in his lower back and Toronto's Josh Donaldson in the fifth after he was kneed in the head while sliding in an attempt to break up a double play.

Rangers manager Jeff Banister said he wasn't sure whether Beltre would be available for Game 2 on Friday. In an effort to remain in the series, Beltre had a cortisone shot.

"Obviously we want Adrian in there," Banister said. "He's the heart and soul of this ballclub."

After going for tests at a hospital, Beltre returned to the clubhouse about an hour after the game and walked gingerly. An MRI confirmed Beltre had a strained back but no structural damage, general manager Jon Daniels said.

"We haven't ruled him out of tomorrow's game," Daniels said.

Texas will have Joey Gallo and Ed Lucas travel from its Arizona Fall League team in case Beltre needs to be removed from the roster, a decision that also would rule Beltre out of the AL Championship Series.

Blue Jays manager John Gibbons said Donaldson felt light-headed while playing defense in the top of the fifth, forcing the AL MVP candidate to come out of the game.

"They check for concussions, and apparently he passed all the tests. So that's good news," Gibbons said.

"That's what we really needed from him," Banister said. "I think he did a great job."

Gallardo is 4-0 with a 1.78 ERA in four career starts against Toronto.

"We got in some good hitter's counts and he wouldn't give in," Blue Jays catcher Russell Martin said. "He didn't make those mistakes that we capitalize on.".

Keone Kela, Jake Diekman and Sam Dyson finished, with Dyson getting a save.

"I expect to have better results," a subdued Price said.

Gibbons said Price was the victim of timely hits by the Rangers.

"He wasn't getting hit around. It was just a couple of key hits at some key times that made the difference," Gibbons said.

Blue Jays slugger Jose Bautista hit a solo homer in the sixth, then left with a sore right hamstring after popping out in the eighth and was replaced in right by Dalton Pompey. The Blue Jays said Bautista is expected to play Friday.

Delino DeShields and Beltre hit RBI singles to give Texas a 2-0 lead in the third. Beltre, injured when sliding into second base as Prince Fielder hit into an inning-ending double play in the first, had difficulty running and was replaced by rookie Hanser Alberto in the bottom of third.

Edwin Encarnacion's run-scoring infield single cut the deficit in half in the fourth - the first run Toronto scored off Gallardo in three meetings this season.

Price hit Odor with a pitch for the second straight at-bat, and Chirinos homered for a 4-1 lead.

"I think he relaxed a little bit with the people at the bottom of the lineup," Chirinos said.

Price hit just three batters all season, none after Toronto obtained him from Detroit on July 30th.

Kevin Pillar doubled home Russell Martin in the bottom half, but Toronto left a runner at third when pinch-hitter Ezequiel Carerra, batting in Donaldson's spot, hit an inning-ending groundouty. Cliff Pennington took over defensively in the sixth.

Bautista's leadoff homer off Kela cut it to 4-3 in the sixth — the first run off the pitcher since July 30. Odor homered in the seventh.

Cito Gaston, who managed the Blue Jays to back-to-back World Series titles in 1992 and 1993, threw out the ceremonial first pitch to veteran left-hander Mark Buehrle, who is not on Toronto's playoff roster.

RHP Marcus Stroman, who returned from a torn left knee ligament to go 4-0 with a 1.67 ERA in four September starts, starts for the Blue Jays on Friday. Texas starts LHP Cole Hamels, who is 7-1 with a 3.66 ERA in 12 starts with the Rangers. Texas has won each of the past 10 games started by Hamels.