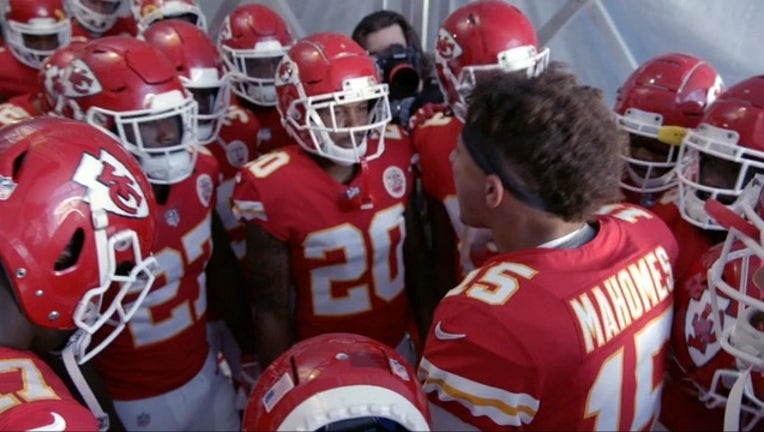 KANSAS CITY, Mo. (AP) - The even-keeled executive with the crisp suit and winning smile stood inside the mostly empty Kansas City Chiefs locker room, his team having just won a home playoff game for the first time in 25 years.

He talked about how much it meant to their long-suffering fans. Spoke glowingly about coach Andy Reid, and his young superstar quarterback, Patrick Mahomes. He praised the rest of a team that captured its third straight AFC West title before knocking off the Colts in the playoffs.

It wasn't until Clark Hunt was asked about winning the AFC title game that he became emotional.

You see, the Chiefs were founded by his father, the late Lamar Hunt, who along with seven others in what would be called "The Foolish Club" founded the AFL.

The personable Texas businessman's importance to establishing the modern NFL was honored in 1984, when the league renamed the silver trophy awarded to the winner of the AFC championship game the Lamar Hunt Trophy.

So it's easy to understand why his son, now the team's chairman and the most visible face of the ownership family, would have tears in the corners of his eyes at the thought of holding it for the first time with a win over the New England Patriots on Sunday night.

"It's been a long time coming," Clark Hunt said. "Since Andy came here we've had a lot of shots, but we finally have a chance to win the AFC championship, and to do it at home is so special for us."

The Chiefs have never played an AFC title game at Arrowhead Stadium. They won at Buffalo to reach the first Super Bowl, and in Oakland on their way to their lone Super Bowl triumph in 1970.

They lost their only other appearance in Buffalo in January 1994.

Indeed, the opportunity to return to the NFL's biggest stage for the first time in 49 years has been a long time coming. The Chiefs lost eight consecutive postseason games during one maddening stretch, and squandered the No. 1 seed along the way. They had great individual players - Tony Gonzalez, Priest Holmes, Joe Montana - yet never managed to hoist the AFC championship trophy.

Former coach Dick Vermeil, who took the Eagles to the Super Bowl and won it with the Rams, said this week that "my biggest regret" was failing to deliver it during his five seasons in Kansas City.

"It would be great. I mean, when your name is on it, that's a pretty big thing," said current Chiefs coach Andy Reid, who still remembers meeting Lamar Hunt during an ownership meeting years ago.

"To have the opportunity to work with his kids and Clark in particular, I understand the importance of that," Reid said. "Not that he has to tell me. He doesn't have to say anything."

In fact, the Chiefs make sure everybody knows the importance.

"One of the awesome things we do with our player development team is that they take us through the whole history," Mahomes said. "We come over to the museum that we have in the stadium and they take us through how he made the AFL, pretty much from scratch, and had this vision for what is now the AFC and combined it with the NFL and made this beautiful league.

"It truly is special for someone like that who has created your franchise," Mahomes added. "You want to do whatever you can to bring honor to him and that family."

The Patriots are no strangers to hoisting the Lamar Hunt Trophy, of course. They are playing for it for the eighth consecutive season, and the coach-quarterback combination of Bill Belichick and Tom Brady have succeeded in hoisting it eight times since their first real season together in 2001.

But despite a perennial juggernaut standing in the way, there is a profound sense of confidence that surrounds the Chiefs these days, an unabashed optimism that can be felt all around town.

Fountains are colored red - at least, those that haven't frozen - and Chiefs banners hang off many of the city's iconic buildings. Fans are streaming into Charlie Hustle, a local vintage clothing store, for their "Arrowhead Collection" of shirts. Those who aren't making a buck off the Chiefs' playoff ride are spending a buck to support them, or in many cases several hundred bucks.

The stars are quite literally aligning: There is a "super blood wolf moon" due Sunday night, where the sun, Earth and moon line up and the moon is cast in a rusty (Chiefs-like) red tint.

The fan fever is not unlike the way the city embraced the Royals when they made back-to-back World Series appearances. And when they won the 2015 championship, some 800,000 turned out for the parade.

Imagine how many would show up if the Chiefs won the Super Bowl.

"It means a lot just to make it to this point," said Chiefs linebacker Justin Houston, one of the team's elder statesmen. I've never had this opportunity, so I think it will means a lot to me, to (the Hunt family) and to the city."

Clark Hunt knows better than to plan for parades before games are won. The Chiefs have come up short many times, and the sting of those disappointments still lingers after all these years. Yet the franchise is also on the precipice of something great, a potential salve to make that pain go away.

"It's very special, obviously, for our entire family," Hunt said. "It's one of the goals that I always put out for the players at the beginning of the year. First thing we want to do is win that Lamar Hunt Trophy. Then we want to go to the Super Bowl and win that Lombardi Trophy."