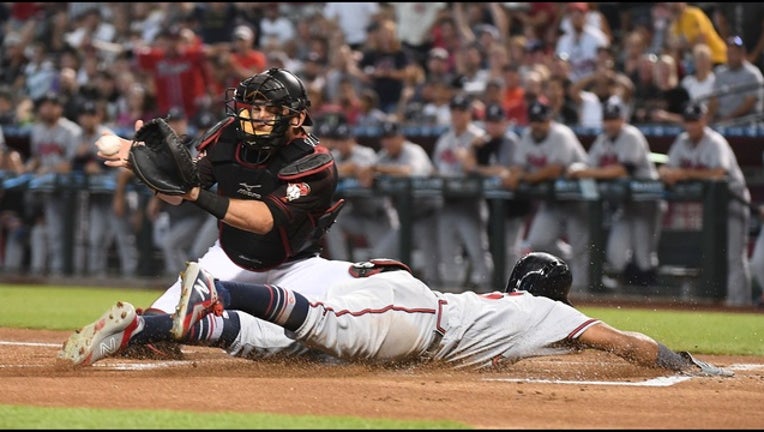 Ronald Acuna Jr. of the Braves safely slides into home to score in front of Jeff Mathis of the Diamondbacks in the first inning of the MLB game at Chase Field on September 8, 2018 in Phoenix, Arizona. (Photo by Jennifer Stewart/Getty Images)

Mathis, one of baseball's best defensive catchers, gets $3.25 million next season and $3 million in 2020.

The Rangers later Tuesday added four players to their major league roster, protecting them from being available to other teams during the Rule 5 draft at the winter meetings next month. They added right-handed pitcher Edinson Volquez and outfielder Scott Heineman from Triple-A Nashville, along with right-hander Wei-Chieh Huang and lefty Taylor Hearn from Double-A Frisco.

The 35-year-old Mathis spent the last two years with Arizona and hit .200 this season with one homer and 20 RBIs in 69 games. He threw out 18 of 53 runners attempting to steal this year, and his 17 defensive runs saved were five more than any other catcher.

Texas earlier this month declined its 2019 option for Robinson Chirinos, the primary starting catcher last season who threw out only six of 59 attempted base stealers. Chirinos had a $4.5 million option for next season with a $100,000 buyout.

Volquez rejoined the Rangers last spring on a two-year deal and had been at the team's facility in Arizona rehabbing from Tommy John surgery in August 2017. He made his big league debut in 2005 with the Rangers, who traded him before the 2008 season to Cincinnati in the deal that brought future AL MVP Josh Hamilton to Texas.