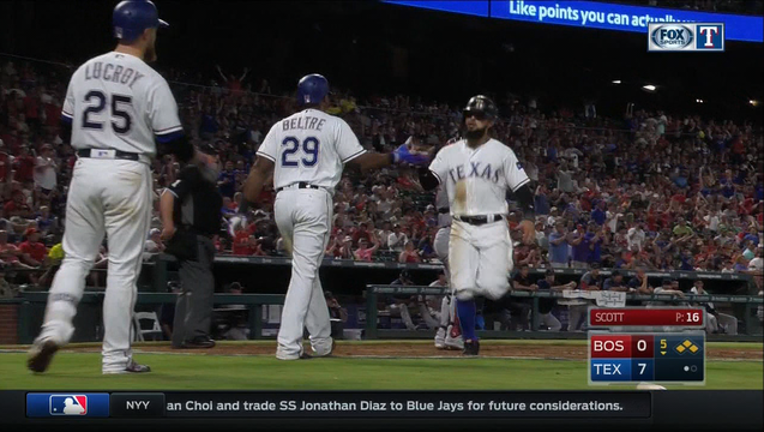 ARLINGTON, Texas (AP) - Andrew Cashner didn't have to dodge any broken bats, and finally gave up a hit only after an error kept an inning alive for Boston.

Cashner held the hot-hitting Red Sox hitless into the sixth, Rougned Odor hit an early two-run homer and the Texas Rangers ended the longest winning streak in the majors at six games with a rain-delayed 8-2 victory over Boston on Wednesday night.

Cashner (4-7) was wild into the third inning, then retired 10 straight batters before first baseman Pete Kozma's error on a dropped throw kept the sixth going. The next batter, Xander Bogaerts, ended the no-hit bid with a two-run homer just over the 14-foot wall in left field.

Kozma had just entered the game at first after pinch-hitting in the fifth for slugger Joey Gallo, who exited with a sore left hamstring. The drop came on a slightly low throw from shortstop Jurickson Profar on an easy grounder by Dustin Pedroia.

The right-hander allowed three hits, three walks and two unearned runs with four strikeouts in seven innings. It was his first start since getting hit on the elbow by a broken bat in a loss at Cleveland - the second straight rough outing for the Houston-area native.

Boston, which had at least 10 hits and six runs in every game during the winning streak, missed a chance to be the first team to sweep a season series of more than three games against the Rangers since they moved to Texas in 1972. The Red Sox won the first five meetings this year.

"We hit some balls hard, we hit some balls right at people," Boston manager John Farrell said. "But make no mistake, Cashner, that was one of the better games he's thrown this year. He's in the mid-90s (mph) with heavy sink."

After a delay of nearly 90 minutes to start the game, Odor's 16th homer put Texas ahead 2-0 in the second. Carlos Gomez had a solo shot , his 12th, in the third.

Odor scored three times before leaving with a bruised left hand after the fifth inning, when he was hit by a pitch. It was the second straight hit batter by lefty reliever Robby Scott, who first plunked Adrian Beltre on the leg.

Doug Fister (0-2) gave up six runs - four earned - over 3 2/3 innings in his third start since Boston claimed him off waivers from the Los Angeles Angels last month.

Profar had two doubles, including a two-run liner to right-center for an 8-0 lead in the fifth, after being called up from Triple-A Round Rock when shortstop Elvis Andrus went on the paternity list.

Andrus, one of five candidates for the final AL All-Star spot, wasn't on Texas' active roster for the first time since making his major league debut as a 20-year-old shortstop to start 2009. Andrus and his new wife were expecting their first child. He's played 1,303 career games.

Andrew Benintendi went 0 for 2 with a pair of walks the day after becoming the first Red Sox rookie to have multiple five-hit games in one season. He also had a two-run single in the 11th inning of Boston's 7-5 win in the series opener.

Red Sox LHP Eduardo Rodriguez will join the team at Tampa Bay and throw a bullpen over the weekend after struggling for a second straight rehab start. He's been out since June 1 with a right knee injury.

Red Sox: LHP Chris Sale (11-3, 2.61 ERA), a potential AL All-Star starter Tuesday, pitches the opener of a four-game series at Tampa Bay on Thursday. He leads the majors with 166 strikeouts and has won 10 of 11 decisions.

Rangers: LHP Cole Hamels (3-0, 4.12) gets the opener of a three-game home series against the Angels on Friday. It will be his third start since missing almost two months with a right oblique strain.