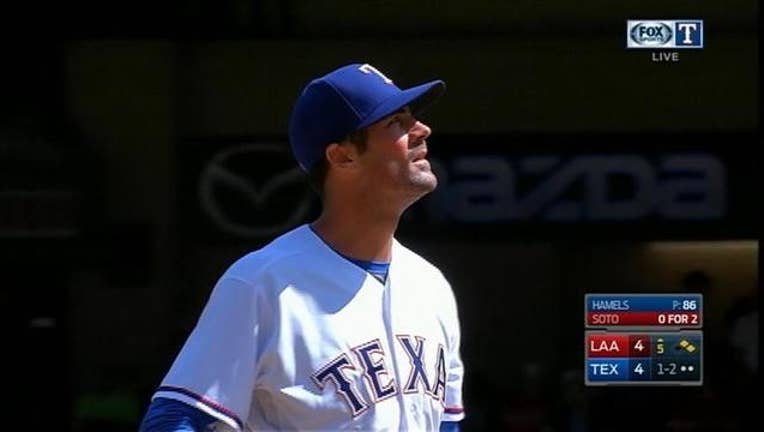 Shane Robinson got two hits, scored three times and drove in a run after being called up from the minors by the Angels earlier in the day.

C.J. Cron added three hits for Los Angeles. Geovany Soto hit his third home run of the season and second of the series.

Angels starter Garrett Richards worked only four innings and gave up four runs, only one of them earned after his throwing error. The short outing came after Matt Shoemaker lasted only 2 1-3 innings in his start Saturday night.

Cole Hamels pitched five innings, the shortest of his 19 regular-season and postseason starts for Texas following his acquisition last July 31. He allowed four runs on seven hits and a season-high four walks.

It was the Rangers' second loss in Hamels' 12 home starts with Texas and the first since his Rangers home debut last Aug. 1.

Texas scored three times in the fourth. Trying to start a double play with no outs, Richards threw between shortstop Andrelton Simmons, standing on second base, and third baseman Yunel Escobar, a few steps to Simmons' right, into center field.

Angels: OF Craig Gentry (right lumbar spine strain) was put on the disabled list. Robinson was selected for the major league roster from Triple-A Salt Lake.

Rangers: The rehab of OF Josh Hamilton has been halted after he tweaked his left knee on Saturday playing for Double-A Frisco. ... RHP Yu Darvish (Tommy John surgery) began his rehab on Sunday pitching two innings for Frisco, with two strikeouts and one walk.