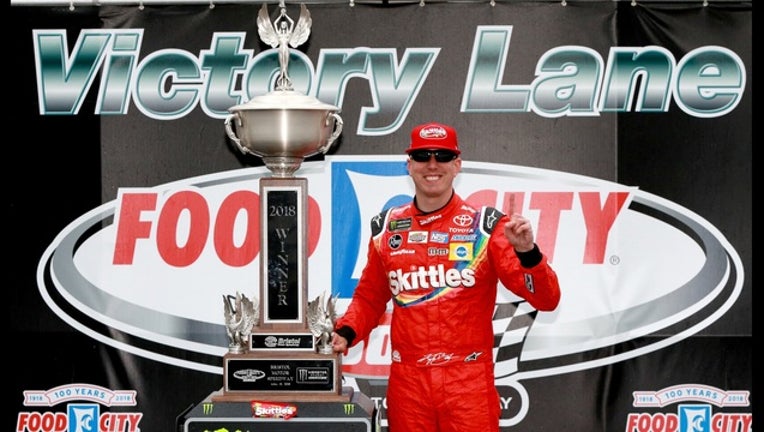 BRISTOL, Tenn. (AP) - Kyle Busch was all smiles and Kyle Larson was all scowls.

Busch celebrated by thrusting his arms in the air and with a traditional bow to the crowd on top of his No. 18 Toyota while the snow began falling - a fitting end to a long weather-stalled weekend.

Busch said after the race that he didn't have the best car, but "we had the best car right at the end."

It was Busch's 45th career Cup Series win, moving him ahead of Bill Elliott into sole possession of 16th place.

It also was his seventh win at Bristol, while Larson has yet to win at the half-mile track.

Coincidentally, Busch won with the aid of longtime nemesis Brad Keselowski, who wrecked with 30 laps left, bringing out the caution flag.

Larson appeared to have the car to beat on Monday, running well ahead of the pack on long green flag runs. But after Busch took on tires during the yellow flag stop, he knew he was back in the race with 22 laps to go. He finally caught Larson with five laps left, bumped him out of the way and scooted by.

Larson made a late charge but couldn't catch him.

"When it comes down to crunch time you gotta go," Busch said.

Asked if Keselowski had moved up on his list of favorites, Busch laughed and said, "That's pushing it too far."

"I kind felt bad for him, maybe that much," Busch said, pinching his thumb and index finger close together. "But it certainly helped our cause. So it was much appreciated, let's go with that."

Larson was leading when the race was postponed Sunday with 296 laps remaining after being delayed several times because of rain. The race also was delayed Monday for about 35 minutes, but the cars finally got back on the track after the rain and sleet subsided.

Larson said he wasn't sure why his car got loose late in the race, which allowed Busch to get by him.

"I just really didn't have any grip," Larson said. "I thought it would tighten up for me and I could get going, but it never really did and I was just really loose. I hate that I didn't win. It's another one at Bristol."

As for Busch, he has another Bristol sword to add to his collection, although he's not quite sure what he's going to do with all of those unusual trophies.

JOHNSON'S TOP FIVE: Jimmie Johnson was pleased with earning his first top-five finish of the season, and hoped to quiet some of his critics.

"We have it rolling in the right direction," Johnson said.

KESELOWSKI'S DAY: Keselowski won the first two stages and initially appeared to be the car to beat. However, the No. 2 Ford struggled on a long green flag run late in the race and fell two laps behind after radioing in that something broke in his suspension. Keselowski hit the wall with 30 laps left, bringing out the final caution.

WALLACE GETS A LEAD: Darrell "Bubba" Wallace now knows that it is like to run up front in a Cup Series race. Wallace passed Busch with 126 laps remaining to lead a Cup race for the first time in his young career. It didn't last long, though, as Busch blew by him a short time later.

WHO'S HOT: Daniel Suarez raced with a fractured thumb he suffered last week at Texas and finished in 11th place. Now that deserves a thumbs-up.

WHO'S NOT: Martin Truex Jr. continues to have a difficult time following up a tremendous championship season in 2017. He was in a wreck on Sunday and raced Monday without a hood, saying his goal was to "stay out of the way" of the other drivers. He finished 30th.

UP NEXT: Busch will look to make it three straight wins next week at Richmond, a track where he has struggled in recent years. "We will try to get better and figure out we need to do to get around there well," Busch said. "It used to be easy, but the last few times we haven't been great as a company."