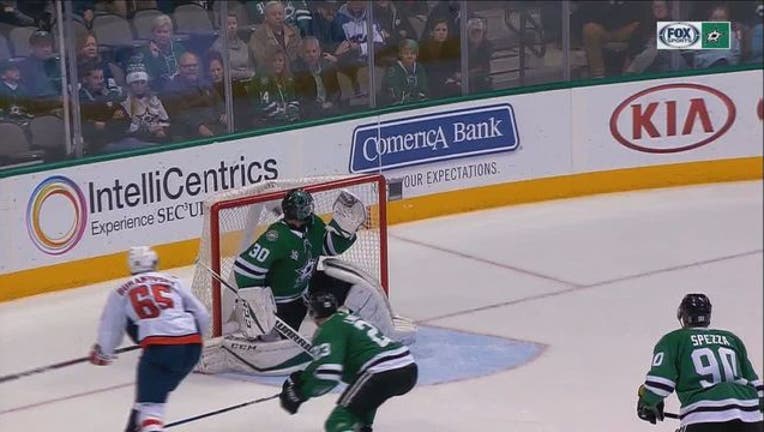 DALLAS (AP) -- Andre Burakovsky scored his second goal of the game 1:51 into overtime, lifting the Washington Capitals over the Dallas Stars 4-3 on Tuesday night.

Burakovsky had one goal in his first 14 games this season. He shot over goalie Ben Bishop from the left faceoff circle in OT, and also assisted on Brett Connolly's tying goal with 2:26 left in the third period.

Both teams scored one goal in each of the three periods. Andre Burakovsky, Dmitry Orlov and Connolly scored for Washington. Jamie Benn had a power-play goal in the first period, Gemel Smith scored in the second and Alexander Radulov gave the Stars a brief 3-2 lead in the third.

Connolly and Radulov each had a goal and an assist.

Washington scored first at 10:35 of the first period. Connolly passed across the ice to Burakovsky in the right faceoff circle, and he beat Bishop with a shot into the upper left corner of the net.

The Stars tied it eight seconds into their first power play at 15:14. Benn redirected John Klingberg's bouncing shot from the top of the slot past Holtby.

Smith gave the Stars their first lead at 11:09 of the second period. In front of the net, he collected the rebound of a shot by Dan Hamhuis from the blue line, moved the puck to his forehand and sent it over Holtby's blocker.

Orlov made a move to beat Klingberg and found himself alone in front of Bishop for the goal that tied it at 2 at 13:22 of the second. It was the fourth of only five shots by the Capitals in the period.

At 15:53 of the third, Radulov took a pass from Greg Pateryn across the blue line and shot the puck into the lower left of the net from high in the slot. Just 1:41 later, Connolly put a wrist shot past Bishop from in front.

NOTES: Dallas had been 2 for 39 on the power play in the previous 14 games and went 1 for 4 on Tuesday. ... Capitals RW T.J. Oshie returned after missing six games with a concussion. ... The Stars traded D Jamie Oleksiak, a healthy scratch throughout their four-game Eastern trip, to Pittsburgh for a conditional fourth-round draft pick. ... Washington RW Tom Wilson increased his league-leading penalty minutes to 91 with eight minutes. He was in the box for roughing when Benn scored for Dallas. ... Smith has scored in consecutive games for the first time in his 40 career games.

Capitals: Play the second game of a four-game trip on Friday at Arizona.

Stars: Host Chicago on Thursday in the second game of a three-game homestand.