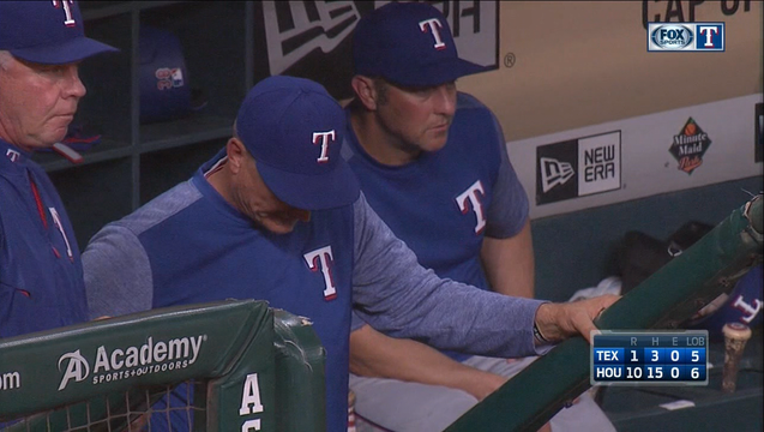 The wait for No. 2 was even shorter.

Fisher homered and had an RBI single for his first major league hits in a nine-run sixth inning to help the Houston Astros to a 13-2 victory over the Texas Rangers on Wednesday night to avoid a three-game sweep.

"Something you can dream of," he said. "I can't say that I would expect to have something like that my first night. But definitely happy that it happened."

The Astros led by three with no outs in the sixth when Fisher, who made his debut on Wednesday, connected off Jeremy Jeffress for a solo home run to the seats in left field. Two pitches later, Jake Marisnick hit a pitch into nearly the same spot to extend the lead to 6-1.

Houston had pushed the lead to 10-1 when Fisher came up again with two outs in the inning. This time he laced a single to right field to send another run home.

"It's a tall task to ask the team to get a guy up twice (in one inning) in his debut," manager A.J. Hinch said.

Fisher is the first player to get the first two hits of his career in the same inning since Adam Laroche did it for the Braves on April 7, 2004.

But the Astros weren't done scoring in that inning yet. Dillon Gee plunked Marisnick before George Springer added a two-run double to make it 13-1. The Rangers finally escaped the sixth when the 13th batter of the inning, pinch-hitter Alex Bregman, grounded out.

Rangers starter Andrew Cashner (3-6) yielded 10 hits and four runs in 4-plus innings for the loss.

Joey Gallo hit his 18th home run on a 466-foot shot to straightaway center field in the seventh for the Rangers, whose five-game winning streak was snapped.

"It was a 5-1 road trip that didn't quite end the way we wanted it to, but I think we still got some good momentum going home," manager Jeff Banister said.

Houston took a 1-0 lead on a groundout by Carlos Correa in the first. McCann doubled to start the second and the Astros extended their lead to 2-0 when he scored on a single by Gonzalez.

Martes sailed through the first four innings, retiring 12 of the first 14 batters he faced. He ran into trouble in the fifth when Jonathan Lucroy started the inning with a single. Martes then walked Gallo before plunking Jurickson Profar.

Martes struck out Jared Hoying before Lucroy scored on a wild pitch to cut the lead to 2-1. Delino DeShields drew a walk to load the bases again, but Martes retired the next two batters to escape the jam.

Rangers: LHP Cole Hamels, who has been out since May 3 with a strained right oblique, could begin a rehabilitation assignment with Double-A Frisco as soon as Friday. ... OF Carlos Gomez (right hamstring strain) went 0 for 3 in a rehabilitation start at Frisco on Wednesday night. He is likely to come off the DL on Friday.

Astros: Fisher was called up when OF Josh Reddick was placed on the 7-day concussion list on Wednesday, retroactive to Tuesday. Reddick was injured when he crashed into the wall trying to make a catch on Monday night.

Banister on Gallo's home run: "That one was real far. I'm not sure I've seen one go that far in this ballpark (but) they don't give you extra points for long ones."

Rangers: Texas is off on Thursday before Tyson Ross will make his debut for the Rangers on Friday when the team opens a three-game series against the Mariners. Ross has been out all season after having thoracic outlet surgery in October.

Astros: Houston also has a day off on Thursday before opening a three-game series against Boston on Friday with Mike Fiers (4-2, 4.29 ERA) on the mound. Fiers allowed two hits and no earned runs in a season-high 7 1/3 innings in a 3-1 win over the Angels on Saturday.