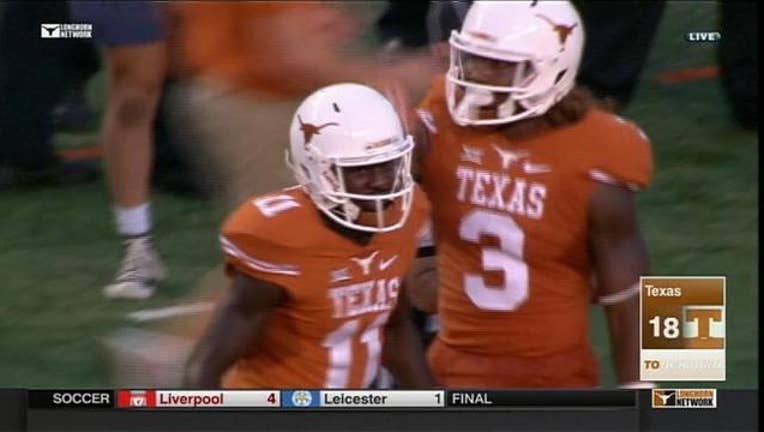 AUSTIN, Texas (AP) — Freshman quarterback Shane Buechele passed for 244 yards and four touchdowns and No. 11 Texas backed up its first national ranking since 2013 with a 41-7 victory over UTEP on Saturday night.

Buechele also showed some skills running the zone read option, giving the Longhorns (2-0) another wrinkle in their new offense.

Buechele threw touchdown passes of 29 and 7 yards to Jerrod Heard, who started at quarterback most of 2015 but moved to wide receiver this season. He also connected with Dorian Leonard for a 46-yard score in the third quarter that made it 34-7. Buechele was 22 of 27 passing.

"I felt good out there," Buechele said. "We started slow but I feel like we finished strong."

The Longhorns avoided a big letdown after their 50-47 overtime victory over Notre Dame that eased some of the pressure off coach Charlie Strong after two losing seasons.

"I was so nervous," Strong said. "Everyone was telling them how good they are and I wondered how would they respond? I kept telling them, 'Just focus. We haven't done anything yet. Let's not be a one-game wonder.'"

UTEP: The Miners missed the passing of injured starting quarterback Zack Greenlee, who was held out to rest a strained knee before the start of the Conference USA schedule. Kavika Johnson was 9 of 15 for 42 yards, and Jones gave the Miners their only punch on offense. The Longhorns knew Jones was the primary option on nearly every UTEP possession until the score got out of hand.

"We're not making excuses for anything. They whipped us handily," UTEP Sean Kugler said.

Texas: Buechele continues to impress. His second start came behind an offensive line that was missing two starters with injuries. Buechele was sacked three times and withstood several more hits, but his first two touchdown passes were precision throws into coverage on the sideline in the end zone. His third was a deep throw that hit Leonard in stride.

UTEP: The Miners host Army next Saturday in their last game before starting Conference USA play.

Texas: The Longhorns get their first road test next Saturday at California, which beat Texas 45-44 last season when the Longhorns missed an extra point in the final seconds.