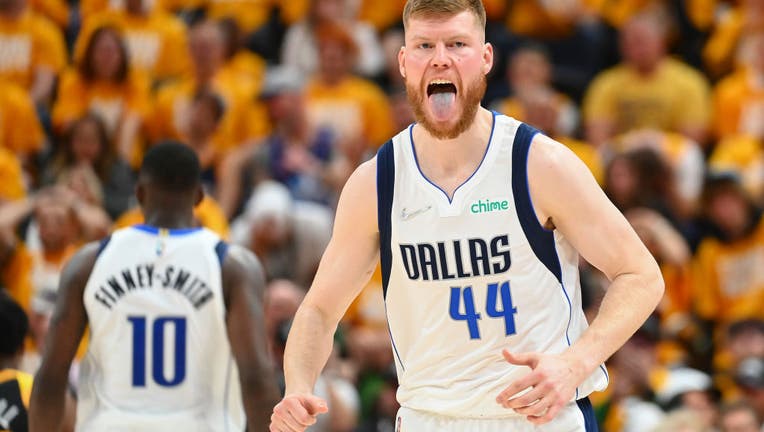 SALT LAKE CITY, UTAH - APRIL 21: Davis Bertans #44 of the Dallas Mavericks celebrates a three point basket during the second half of Game Three of the Western Conference First Round Playoffs against the Utah Jazz at Vivint Smart Home Arena on April 2

SALT LAKE CITY - Jalen Brunson was lying flat and still, watching his Dallas teammates build a 17-point lead before halftime on the monitor in the locker room.

"I saw how hard the team was playing when I was laying back there," Brunson said. "It gave me a little mojo to come back out there and do my thing."

Brunson scored 31 points playing with a bruised back and the Mavericks — without the injured Luka Doncic — beat the Utah Jazz 126-118 on Thursday night to take a 2-1 lead in the first-round playoff series.

"We’re all on the same page," Brunson said. "We’re all clicking. We’re all talking and communicating."

"I just told the guys we haven’t done anything," Kidd said. "They won at our place and now we won here. We need to put this game behind us and figure out what we need to do better."

It’s hard to imagine the Mavericks playing much better without Doncic and hope to have him back for the next game.

Spencer Dinwiddie scored 10 of his 20 points in the fourth quarter for Dallas, Maxi Kleber had 17 points and Dorian Finney-Smith added 14 points, hitting a 3-pointer with 1:56 left for a 10-point lead.

Doncic has missed all three of the games in the series with a strained calf, with signs pointing to his return for Game 4 on Saturday in Salt Lake City.

Donovan Mitchell scored 28 of his 32 points in the second half for Utah. Bojan Bogdanovic added 24 and Mike Conley had 21. The Jazz had won 11 in a row at home against Dallas.

Conley got the Jazz to 103-102, but Dinwiddie made two baskets and Brunson scored six points on three straight possessions to make it 113-104.

"His shot-creating and shot-making has been amazing all season, but the determination he has coming down the stretch to hit those big shots and the confidence he has is just fun to watch," Kleber said.

Brunson appeared to hurt his back midway through the second quarter when Royce O’Neale hit him full-speed from behind. He moved gingerly, rubbed his lower back and earned a technical on his way off the court complaining about a cheap shot.

Brunson didn’t want to elaborate on the hit after the game. "I said what I had to say" on the floor.

But he shook it off and toyed with Jazz on a variety of drives to the baskets against several different defenders. Brunson now has 96 points in the three games of the series. He only has one turnover in the last two games.

"He’s unique in his physical strength and his ability to kind of keep his dribble alive in the lane where he really uses his body. He’s able to play with his feet on the floor, so if you do try to come over and help, he has the ability to find people and spray the ball out," Utah coach Quin Snyder said.

Though the Mavericks were short-handed, the bench made a big difference.

"I trust every one of those guys and we just want to put them in a position to succeed," Kidd said.

"It’s just trusting each other. Every single guy, if we take a great look, we’re happy and believe in each other," Bertans said.

In all, the Dallas reserves outscored the Utah bench 49-24.

Mavericks: After going 8 for 11 from 3-point range in Game 2, Kleber made three straight in his first two minutes on the court. "I just let it fly," Kleber said. … Tim Hardaway Jr. (foot surgery) is probably out for the playoffs unless Dallas makes a deep run. … Dirk Nowitzki and Mark Cuban celebrated with the team in the locker room.