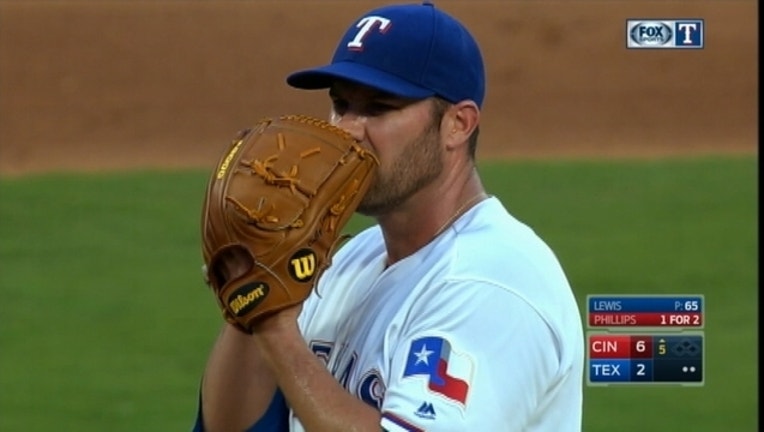 By taking the opener of a two-game interleague series, the Reds snapped the Rangers' run of 10 straight series victories a night after Texas got credit for a series win by beating Baltimore in a makeup game between the AL's top two teams.

Texas starter Colby Lewis (6-1) had the best season-opening winning streak of his career snapped, leaving after five innings with cramping in his right arm.

Lewis allowed three of the first four hitters to reach capped by Bruce's 16th home run in the 36-year-old right-hander's first start since taking a perfect game into the eighth inning and a no-hitter into the ninth of a 5-1 win at Oakland.

Anthony DeSclafani (1-0) gave up five hits and two runs with a walk and six strikeouts in seven innings in his third start. The right-hander missed the first two months with a strained left oblique sustained in his final spring training appearance.

Cuban right-hander Raisel Iglesias, out since the last of five starts on April 25 because of a right shoulder impingement, pitched two scoreless innings to finish the Cincinnati win on the same day he was activated from the 15-day disabled list.

Lewis, making his first career start against the Reds, allowed five hits and six runs in his first loss since last Sept. 28. The cramping was in his right triceps.

Cozart's 11th homer was a solo shot in the seventh, and Bruce drove in his fourth run with his third hit, a ground-ball double against the shift down the line in left. Brandon Phillips scored from first.

Jurickson Profar had a two-run homer to get the AL West-leading Rangers within 3-2 in the second. Texas' series streak was the longest in the majors since Tampa Bay won 10 straight in 2013.

Reds: 1B Joey Votto sat for the first time this season because of an illness.

Reds: RHP Dan Straily (4-3, 3.66) makes his 10th career appearance against the Rangers. The previous two were with Houston and the first seven with Oakland. He is 4-3 with a 4.47 ERA against Texas.