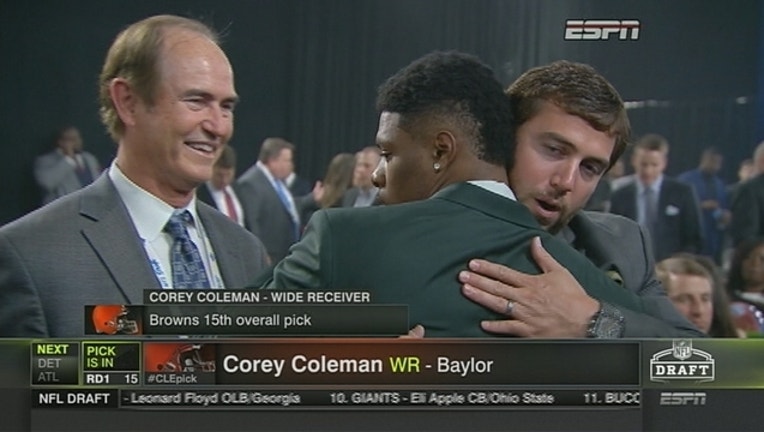 BEREA, Ohio (AP) — The Browns came into the NFL draft craving speed, a downfield target and someone to score touchdowns.

"I can do a little bit of everything," he said.

After trading out of the No. 2 overall spot and a chance to pick a potential franchise quarterback last week, the Browns made another deal before selecting Coleman, a speedy wide receiver from Baylor, with the No. 15 pick in the NFL draft on Thursday night.

On the clock for the first time, Cleveland's new, analytics-focused front office sent the No. 8 pick and a sixth-rounder this season to Tennessee in exchange for No. 15, a third-rounder (No. 76) and a second-round pick next year.

The Browns then nabbed Coleman, who scored 20 touchdowns last season and won the Fred Biletnikoff Award, given to the nation's top receiver. Coleman's speed — he's been clocked at 4.38 seconds in the 40 — made him attractive to the Browns, who were desperate for a big-play threat after Travis Benjamin left as a free agent and because of Josh Gordon's continued drug limbo with the NFL.

Browns vice president of football operations Sashi Brown said Coleman was the team's top-rated wide receiver and the team was thrilled he was still available at 15.

"He's a tremendously productive, dynamic playmaker," Brown said. "It's something we haven't had here in recent years. With Corey's speed, tenacity and ability to turn small plays into long plays, we're really excited to bring him here."

New coach Hue Jackson needs to improve a receiving corps that accounted for a league-low eight TDs last season. The Browns scored just 28 TDs and offensive weapons to put defenses on edge. Jackson believes Coleman, who may be undersized at 5-foot-11 and 190 pounds, can change that.

"He scores touchdowns," said Jackson, who spent the past two seasons as Cincinnati's offensive coordinator. "He can light it up from anywhere on the field."

By making their second trade in the first round, the Browns now have seven picks in the top 100. They own the No. 32 overall pick and Brown said the team has already received numerous phone calls from teams interested in acquiring it.