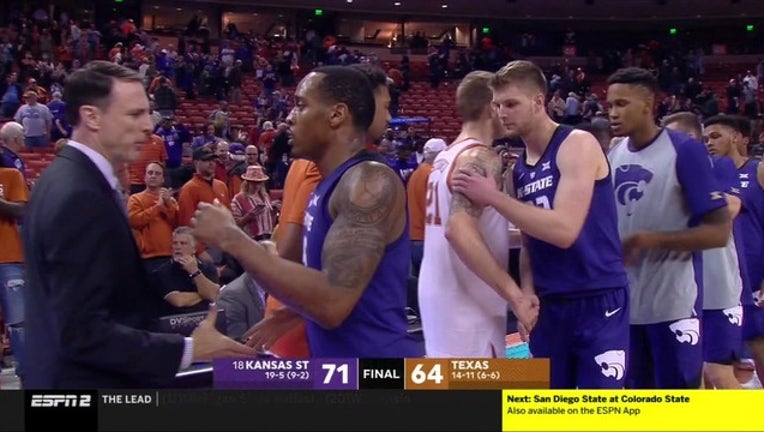 Three other Wildcats scored in double figures, Dean Wade with 12 points, and Kamau Stokes and Makol Mawien with 11 apiece.

The Wildcats used runs of 8-0 and 9-0 in the second half before seven minutes were gone, the latter giving the Wildcats a seven-point lead. Even so, they could not shake Texas. A long 3-pointer by Kamau Stokes with 4:30 left gave them their second seven-point lead of the half.

Roach committed three turnovers in the first six minutes of the game, but he eventually made a star turn, scoring 14 points in the first half, primarily with hard drives to the basket that resulted in layups and free throws.

Ramey added all 10 of his points for Texas in the half, and the Longhorns led 39-35 at the break.

Roach slowed down in the second half, scoring just three points and committing three more turnovers.

Kansas State played without guard Cartier Diarra, its top reserve who recently suffered a broken finger on his shooting hand that will require surgery. He's out indefinitely.

Kansas State: The Wildcats maintained their hold on first place in the Big 12 standings. One reason is a 5-1 record on the road in conference games, an area in which they have improved the last three seasons. They are 13-11 in Big 12 road games since the beginning of 2016-17. In the previous two seasons they were 2-16 in Big 12 road games. Kansas State did get a break when Baylor was missing two starting guards, including leading scorer Makai Mason, on Saturday.

Texas: The Longhorns, a really poor 3-point shooting team earlier in the season, have recently improved, but they still ranked only 227th nationally before Tuesday with 33.4 percent accuracy. They made 17 of 43 (39.5 percent) in two games before facing Kansas State, so perhaps they were due for a bad game. They had one, hitting 4 of 19 against the Wildcats.

Texas hosts Oklahoma State on Saturday. Texas lost to the Cowboys 61-58 on Jan. 8 in Stillwater, stopping their momentum after a 2-0 start in Big 12 play and starting a three-game losing streak.