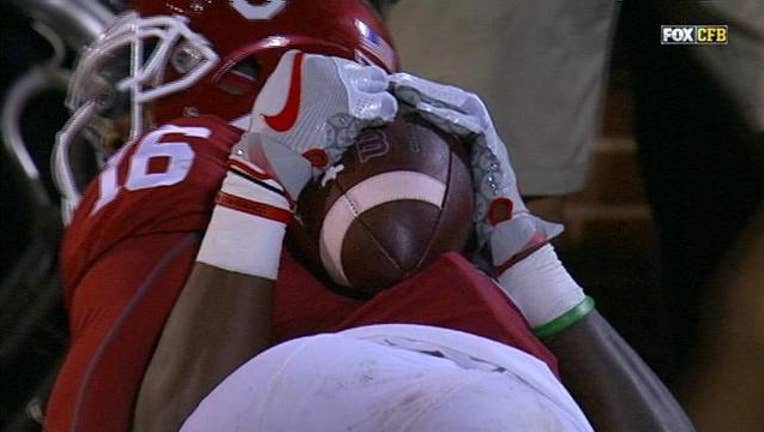 NORMAN, Okla. (AP) — Noah Brown tied the Ohio State record with four touchdown receptions, and the No. 3 Buckeyes rolled past No. 14 Oklahoma 45-24 on Saturday night.

Brown caught five passes for 72 yards. On his best grab, he reached around Michiah Quick and held onto Quick and the ball while falling out of bounds for a 21-yard touchdown reception with 6 seconds left in the first half. Brown entered the game with five catches and one touchdown in his career.

J.T. Barrett passed for 152 yards and four touchdowns and ran for 74 yards for the Buckeyes (3-0). Mike Weber ran for 123 yards, pacing an attack that pounded out 291 yards rushing.

Oklahoma (1-2), which lost its opener to Houston, was in desperate need of a big win to keep its hopes of returning to the College Football Playoff alive. Instead, a school-record home crowd of 87,979 watched the Sooners get dominated for most of the night. Ohio State led 35-17 at halftime.

Ohio State's Curtis Samuel broke loose for a 36-yard touchdown run on fourth-and-1 to open the scoring. The Buckeyes threatened to break the game open when Jerome Baker scored on a 68-yard interception return, but Oklahoma's Joe Mixon returned the kickoff 97 yards for a score.

Ohio State seized momentum for good when Marshon Lattimore intercepted a pass by Mayfield, then Brown caught a 37-yard touchdown pass from Barrett on the next play to give the Buckeyes a 28-10 lead.

OHIO STATE: The Buckeyes are a threat to win the national title, and Barrett showed why he's near the top of Heisman Trophy watch lists.

OKLAHOMA: Mayfield continues to get himself into trouble by forcing throws. His coaches criticized him for that after the loss to Houston, and he appeared to have fixed the problem against Louisiana-Monroe before regressing against the Buckeyes.

POLL IMPLICATIONS: Ohio State strengthened its position, especially with No. 2 Florida State getting blown out by Louisville. Oklahoma will be fortunate to remain in the top 20.

OHIO STATE: The Buckeyes are off next week. They host Rutgers on Oct. 1.

OKLAHOMA: The Sooners also are off next week. They will play at TCU on Oct. 1.