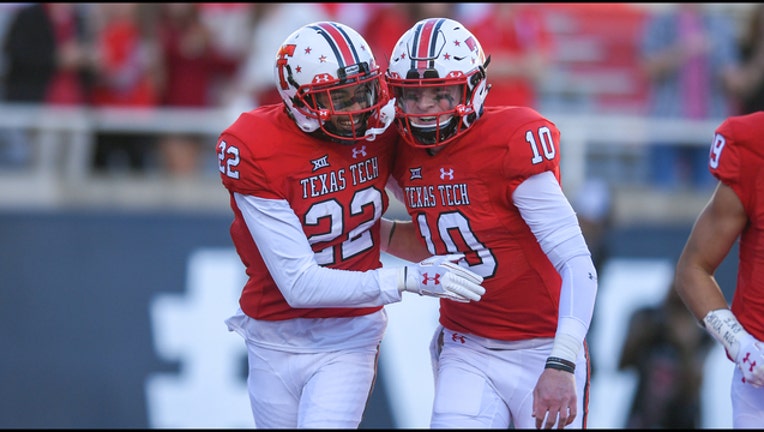 Seth Collins and Alan Bowman of the Texas Tech Red Raiders celebrate a touchdown during the second half of the game against the Kansas Jayhawks on October 20, 2018 at Jones AT&T Stadium in Lubbock, Texas. (Photo by John Weast/Getty Images)

LUBBOCK, Texas (AP) - Alan Bowman threw for 408 yards and three touchdowns while playing for the first time since suffering a partially collapsed lung three weeks ago, and Texas Tech beat Kansas 48-16 on Saturday.

Bowman completed 36 of 47 passes while showing accuracy on short and deep passes, with only one interception. The true freshman was the nation's leading passer when he got crushed between two West Virginia defenders in Texas Tech's last home game Sept. 29, and was released from the hospital four days later.

Antoine Wesley had nine catches for 155 yards and a touchdown. T.J. Vasher and Seth Collins also had TD catches for the Red Raiders (5-2, 3-1 Big 12), who had 553 total yards despite three turnovers.

The Jayhawks played their first game since offensive coordinator Doug Meacham was fired. Peyton Bender threw for 221 yards and two touchdowns while freshman Pooka Williams had 16 carries for 70 yards to finish 38 yards below his rushing average that was second-best in the Big 12.

Kansas: The Jayhawks have lost all four of their Big 12 games after finishing their nonconference schedule with consecutive victories games for the first time since 2009.

Texas Tech: Coach Kliff Kingsbury is back to .500 as coach of his alma mater - at 35-35 overall in his sixth season. The former Red Raiders quarterback was 7-0 in his coaching debut in 2013, and is 28-35 since. Tech is one win shy of bowl eligibility, a mark it didn't reach until the regular-season finale last year.