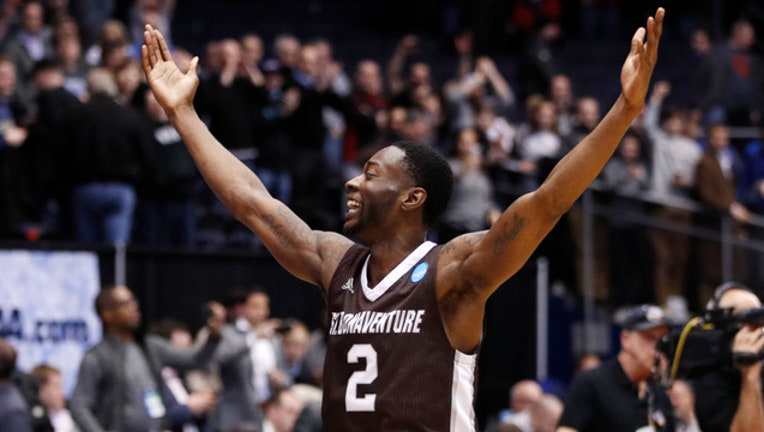 DAYTON, Ohio (AP) - The basketball was still high in the air - flung to start the celebration - when the buzzer sounded and the Bonnies' long-awaited March celebration commenced. Players chest-bumped on court. Coach Mark Schmidt jumped and waved his arms.

The crowd at the University of Dayton Arena - a place where St. Bonaventure is usually booed - got caught up in the moment, too. And why not? It had been 48 years since anyone saw something like this out of St. Bonaventure.

Courtney Stockard returned from a hamstring injury and scored 26 points, and Jaylen Adams hit a jumper and three free throws in the final minute Tuesday night, rallying the Bonnies to a 65-58 victory over UCLA and their first NCAA Tournament victory since 1970.

At long last, it was time to party in March .

"It can't get better," Schmidt said.

They'll have more chances. The 11th-seeded Bonnies (26-7) will play sixth-seeded Florida (20-12) in Dallas on Thursday night in the East region. They did interviews, showered and headed for a flight to their next destination.

"Florida's got four or five days on us, so we'll be watching tape on the plane," Schmidt said. "We've got a 2 a.m. flight, but it couldn't be a better flight. Ever."

St. Bonaventure set a school record with its 26th win. Stockard got the Bonnies in position for the drought-busting tournament victory by leading a late 12-0 run. Adams - who missed 14 of his first 15 shots - closed it out in the final 49 seconds.

"I'm still not 100 percent," Stockard said, "but I'm feeling way better than when I did when I left the Richmond game. So I can't really let an opportunity like this pass."

UCLA (21-12) was surprised that it got relegated to the First Four for the first time in its history - the Bruins have been to 18 Final Fours. They had trouble making shots against the Bonnies' zone defense and matched their season high with 20 turnovers, a disappointing ending to a season that started with an international incident .

Freshmen Jalen Hill, Cody Riley and LiAngelo Ball were accused of shoplifting during a trip to China in November. All three were suspended for the season, and Ball left the school.

UCLA's Aaron Holiday led the Pac-12 in scoring but couldn't put his touch on the First Four game. He scored 20 points but had 10 turnovers, including three in the final 29 seconds as the game slipped away.

"I felt like we matched them pretty well," Holiday said. "We just turned the ball over too much."

Adams is the Bonnies' all-time leading scorer as a guard but had a rough time as well until the final minute. He finished with eight points on 2-of-16 shooting.

St. Bonaventure: The undersized Bonnies lack depth and were glad to get Stockard back from the hamstring injury. He's scored 21, 31, 22, 19 and 26 points in the last five games.

UCLA: Holiday was the Bruins' indispensable player on offense in the last six games, averaging 26 points while sitting out for only 43 seconds total. The Pac-12's leading scorer got the Bruins going early, hitting his first three shots as they pulled ahead 14-5. He missed his next eight shots as St. Bonaventure rallied.

A LOT OF Ws

UCLA was booed by the Dayton crowd when it took the court. St. Bonaventure - like the Flyers, an Atlantic 10 team - got a loud ovation. St. Bonaventure also played at UD Arena on Jan. 3 and lost to the Flyers 82-72. That time they were booed, of course.

St. Bonaventure will try to win two games in the NCAA Tournament for the first time since 1970, when it beat Davidson, N.C. State and Villanova before losing to Jacksonville. The Bonnies had lost three NCAA Tournament games - in 1978, 2000 and 2012 - since that last win in 1970.