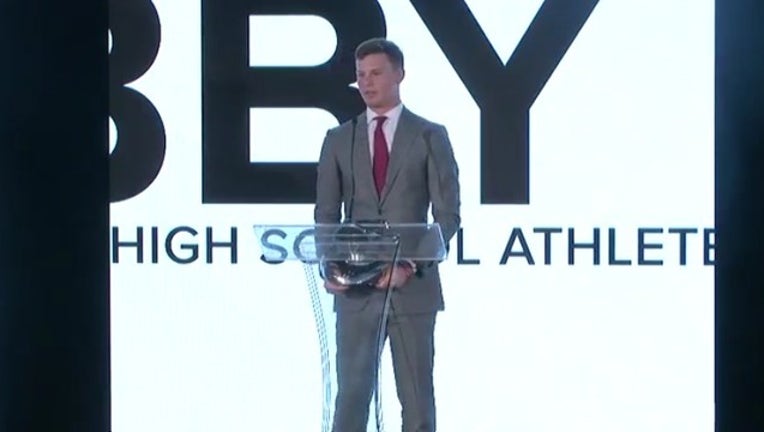 The younger Witt added another honor, too, when he and softball pitcher Kelley Lynch were named national prep athletes of the year on Tuesday night.

The son of former major league pitcher Bobby Witt, the Witts are the first father-son duo to be selected in the top three of the draft.

"He pretty much taught me the game since I was little," said the younger Witt, who pitched and played shortstop. "It's 90% mental and 10% physical and he's always taught me that and instilled the hard work."

Witt Jr. is skipping college to play in the Arizona rookie ball league with an eye on the major leagues.

"It's been a goal of mine ever since I was little," he said.

He received his trophy from retired NFL great Peyton Manning, a former winner.

Witt Jr., of Colleyville, Texas, batted .482 with 15 doubles, nine triples and 15 home runs, compiling 55 RBIs - 28 of which came with two outs. He led Colleyville Heritage High to a 39-3 record and the Texas Class 5A state title.

The younger Witt had a 4.0 grade point average.

"I just want you women, you ladies, to understand I stood on the shoulders of giants and so will you," Wambach said, invoking the names of women's World Cup champions Megan Rapinoe and Alex Morgan.

"What Megan and Alex have done in terms of celebrating their victories, being confident, being badass, you all take that into every step of your career because the world is ready for you."

Lynch, of Sharpsburg, Georgia, is the first softball player to win national athlete of the year honors in the program sponsored by Gatorade.

Lynch singled out her mother for "playing two roles the last six years." Her father, who dreamed of Lynch playing Division I softball, died of cancer when she was 12. She has his date of death - March 7, 2011 - tattooed on the inside of her right arm.

"I felt still attached when I'm on the field," Lynch said. "I think for sure he's probably smiling right now. I definitely think of him."

Witt Jr. and Lynch will appear on the cover of next week's Sports Illustrated.

The winners and nominees will walk the red carpet at The ESPYS on Wednesday night.