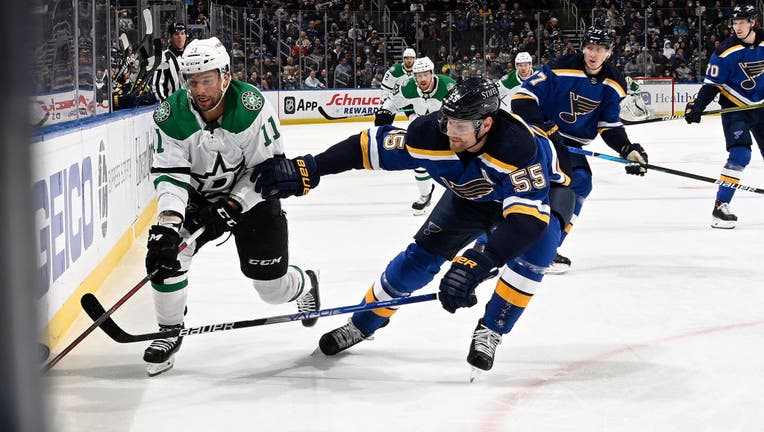 ST. LOUIS, MO - JANUARY 9: Luke Glendening #11 of the Dallas Stars and Colton Parayko #55 of the St. Louis Blues battle at the Enterprise Center on January 9, 2022 in St. Louis, Missouri. (Photo by Scott Rovak/NHLI via Getty Images)

Kyrou won it with 29 seconds left. O'Reilly tied it at 1-all with 47 seconds to go while the Blues had a 6-on-4 advantage.

St. Louis extended its home ice point streak to 12 games, going 11-0-1 during the run. Jordan Binnington made 26 saves for the Blues.

Jason Robertson scored a second-period goal for Dallas, which had a four-game winning streak snapped.

The Blues' two goals came after Braden Holtby had stymied them for most of the contest.

O'Reilly converted from the slot after a shot hit the backboard and bounced in front of the net. Dallas defenseman Miro Heiskanen was given a slashing penalty on the O'Reilly goal, which set up Kyrou's power-play tally.

Robertson scored his 12th of the season off a goal-mouth scramble. He poked the puck past Binnington at 9:16.

The Stars were coming off a 3-2 win over Pittsburgh on Saturday, snapping the Penguins' 10-game winning streak. Robertson, who has points in his last seven games, assisted on all three goals in that win.

The teams had played three times this season prior to Sunday's contest and all three ended up 4-1. The Blues won two.