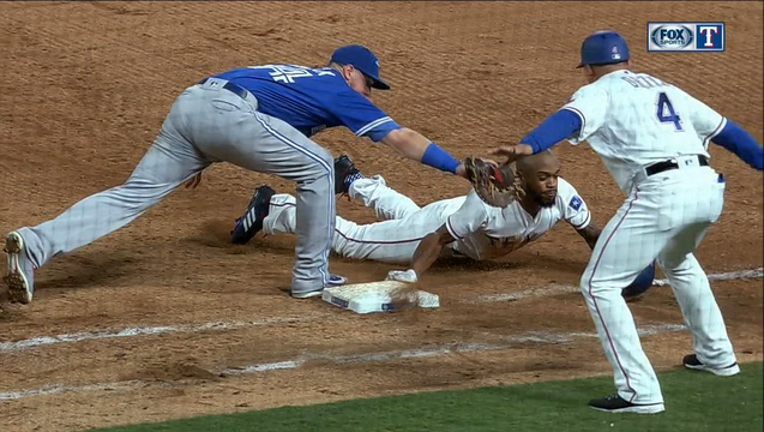 ARLINGTON, Texas (AP) - Darwin Barney's two-run homer capped a big first inning and was just enough for the Toronto Blue Jays to earn a victory - and again get within one game of their first .500 record this season.

Still, the shot by Barney over the left-field wall that capped a quick six-run outburst in a 7-5 win Wednesday night wasn't quite as exciting as Rangers slugger Joey Gallo's drive that ricocheted off of it for an inside-the-park homer.

Ryan Goins drove in three runs for Toronto, including a two-run double in the first that preceded Barney's homer off Tyson Ross . Barney was 4 for 40 in his previous 15 games.

Gallo's 19th homer, an opposite-field shot leading off the fifth, was among his career-high three extra-base hits - he also had two doubles and scored three runs. The 6-foot-5, 230-pound slugger was 6 for 50 over his previous 14 games before a night off Tuesday.

"As soon as it hit the wall and he went down, I thought I might have a chance at scoring. It was pretty exciting," Gallo said.

"Day down I think freshened him up a little bit," Rangers manager Jeff Banister said. "It's always fun to watch a big man like that run around the bases. ... It's fun to watch when this guy is swinging the bat well."

Roberto Osuna worked the ninth for his 19th save. The right-hander has converted his last 18 chances since consecutive blown saves in late April.

Ross (1-1) threw 41 pitches in the first and allowed seven runs over three innings in only his second start since signing with Texas as a free agent in January. San Diego's opening day starter in 2016 missed the rest of the season because of right shoulder issues, then was out to start this season while recovering from surgery for thoracic outlet syndrome.

Goins' RBI groundout in the third put Toronto up 7-0, before Shin-Shoo Choo's two-run homer in the bottom of the inning.

Gallo doubled again in the sixth and scored on a two-run single by Delino DeShields, the last Texas hit.

"They just kept creeping back; we scored early," Toronto manager John Gibbons said. "We took advantage of the kid in the first."

Blue Jays: Pearce, who was 3 for 3 at the plate, was replaced in left field to start the sixth. "At first, when the adrenaline was in there, I thought I could go," he said. ... RHP Leonel Campos was put on the 10-day disabled list, a day after he strained his right groin covering first base. The Blue Jays' 12 players on the DL match Tampa Bay for most in the majors.

Rangers: LHP Cole Hamels (right oblique strain) threw 81 pitches in 5 2/3 innings for Double-A Frisco and could return to the Texas rotation as early as next week. He's been out since late April.

Jose Bautista made his Blue Jays-record 857th career start in right field, breaking a tie with Jesse Barfield. ... Choo had two hits and two walks, reaching base multiple times for the seventh game in a row and 10th time in 11 games. He has reached base in 26 of 51 plate appearances over his last 11 games.

The Rangers have 26 inside-the-park homers in their history. Gallo's was only the fourth at home in 24 seasons in their current ballpark.

Blue Jays: The Blue Jays are 0-8 when attempting to even their record, including a 6-1 loss Tuesday night, and have been outscored 62-20 in those defeats.

Rangers: Texas wraps up a seven-game homestand before playing 20 of its next 26 games on the road. The Rangers have lost eight of their last 12 at home.