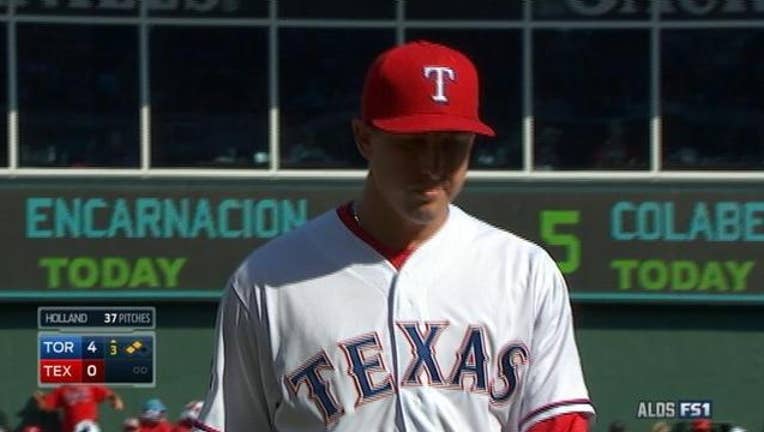 Josh Donaldson and Chris Colabello hit home runs before 40-year-old knuckleballer R.A. Dickey threw his first postseason pitch, and the Blue Jays won 8-4 in Game 4 on Monday to send the series back to Toronto.

Game 5 is Wednesday. Cole Hamels starts for the Rangers against Marcus Stroman in a rematch from Game 2, which Texas won in 14 innings.

After losing the first two games in the series at home, the Blue Jays won both games in Texas in a span of 24 hours.

Dickey, the 2012 NL Cy Young winner, allowed one run over 4 2-3 innings and was pulled with a 7-1 lead and a runner on base. Then 2012 AL Cy Young winner David Price took over and pitched three innings, getting the win after losing in the opener.

Kevin Pillar also connected as three of the first eight Toronto hitters homered off Derek Holland, in his first postseason start since 8 1-3 scoreless innings against St. Louis in Game 4 of the 2011 World Series.

Only two teams in MLB history have lost a best-of-five series after winning the first two games on the road — Oakland against the New York Yankees in 2001, and Cincinnati to San Francisco in 2012.

On the way to their first World Series in 2010, the Rangers won the first two games of the ALDS at Tampa Bay, then lost Games 3 and 4 at home before winning the deciding fifth game against the Rays on the road.

The Blue Jays, in the playoffs for the first time since their 1993 World Series championship, have won nine of their last 10 postseason road games. Texas dropped to 1-9 in division series games at home.

Adrian Beltre, who hadn't played since exiting early from the series opener because of lower back stiffness, was a late addition to the Rangers' starting lineup.

Beltre had two singles and a deep flyout, but the 36-year-old third baseman clearly was still having issues with his back he hurt sliding into second base Thursday. He moved gingerly going to first base after both hits, and did the same when advancing to second base on the wild pitch that allowed Shin-Soo Choo to score in the third inning.

Holland was gone after Donaldson walked and Jose Bautista doubled high off the 14-foot wall in left field to start the third. The Texas lefty has allowed six homers in eight-plus innings against the Blue Jays this season — they hit three homers in six innings against him in a 6-5 win on Aug. 25.

Ben Revere started the game with a bunt single and Donaldson followed with his second homer of the series. Colabello's two-out homer made it 3-0 before Texas even batted.

Pillar put the Blue Jays up 4-0 when his 412-foot shot deep into their bullpen in left field in the second. He also had RBI singles in the third and seventh innings.

Dickey, who turns 41 on Oct. 29, made his postseason debut in the stadium where he got his first major league victory for the Rangers in 2003. He was the 18th overall pick by Texas in 1996, pitched in his first big league game in 2001 and in 2005 started learning how to throw the knuckleball while still with the Rangers.

Even Dickey, in his 13th major league season and his fifth team, even talked the day before his start about how things have come full circle for him, calling it "poetic ... a neat narrative."

But Dickey, whose Cy Young came after winning 20 games for the New York Mets, came up one out short of qualifying for the win when he was replaced by Price with two outs in the fifth and a 7-1 lead. Dickey gave up five hits with three strikeouts and no walks.

The Rangers got three runs off Price, who was gone after a two-out RBI single by Elvis Andrus in the eighth that made it 8-4.

Price won his Cy Young with Tampa Bay, was traded to Detroit midway through the 2014 season and acquired by the Blue Jays on July 30. He allowed five runs and five hits over seven innings in Game 1 on Thursday, when he dropped to 0-6 in six playoff starts. His only other postseason victory was also in relief.

Hamels and Stroman will pitch on regular rest. The Rangers have won the last 11 games started by Hamels, who they added in July in a trade from Philadelphia. Stroman was tossing in the bullpen with Price early in Game 4.