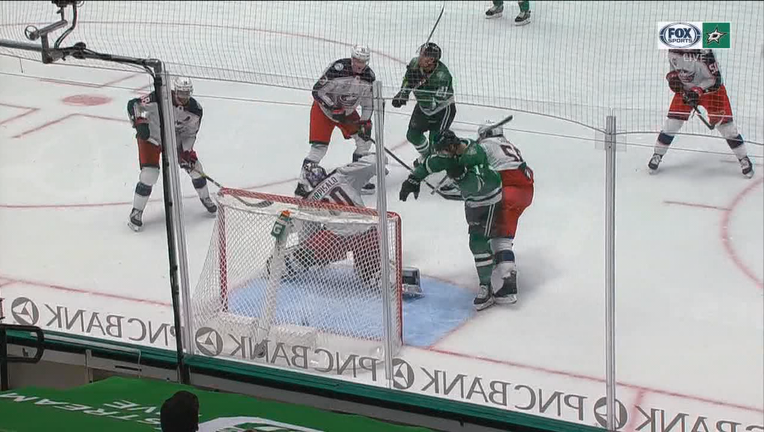 DALLAS - Boone Jenner had a goal and an assist, Oliver Bjorkstrand and Eric Robinson added third-period goals, and the Columbus Blue Jackets held off a late rally attempt to beat the struggling Dallas Stars 3-2 on Thursday night.

Korpisalo stopped 22 shots for the Blue Jackets, who have won two straight – equaling their longest winning streak of the season – after going 0-4-1.

"We’ve just got to keep taking a step forward and find some consistency," Columbus coach John Tortorella said. "I’m not going to jump up and down and do cartwheels here. We’re slowly trying to get better. You put a couple of games together, you win a couple of games."

The Stars have lost four straight and are 1-7-3 in their last 11 games after beginning the season 4-0-0. Miro Heiskanen and Jason Robertson scored third-period goals after Dallas had been blanked for a span of 189:46, having been shut out in its two previous games. Anton Khudobin made 19 saves.

The teams, both trying to move into the Central Division’s top four, will meet again Saturday night at American Airlines Center. That will end a two-game road trip for the Blue Jackets and will be the third of six straight home games for the Stars.

Jenner broke a second-period scoreless game when he came out of the right corner with the puck following a collision with Stars defenseman Andrej Sekera, fought through two Dallas skaters and slid a wrist shot past Khudobin with a left-handed wrist shot at 18:11.

"You figure it’s a typical ‘Jens’ goal; he just jams it in," Tortorella said. "But he made a really nice play on the defenseman that comes in when he takes the puck out of the corner."

Jenner has scored in consecutive games for the first time this season.

"The puck popped loose and I just tried to get it," he said. "Once I got it above the goal, just get in a shooting position and try to get it on net."

Bjorkstrand converted a defensive zone turnover by Joel Kiviranta into the second goal at 2:23 of the third. Eric Robinson redirected a shot from Jenner with his skate blade at 4:05 of the third period to make it 3-0.

Heiskanen fired a wrist shot from near the blue line at 8:35 of the third for Dallas’ first goal since the second period of its 3-2 loss at Florida on Feb. 25 and his first of the season.

"It’s always nice to score goals," said defenseman Heiskanen, who scored 20 in his first two NHL seasons, "but we have to win games. We have to find a way to win these games."

A little more than two minutes later, rookie Robertson collected a loose puck in the crease and scored his third of the season at 10:48.

IT’S ABOUT US, NOT THEM

Bjorkstrand said the Blue Jackets couldn’t go in concerned about an opponent that had lost three straight and had not scored in more than 142 minutes.

The Stars were 0 for 2 with the man advantage making them 1 for 18 in their last six games. This after charging out of the gate 10 for 18 during the season’s initial four-game winning streak.

The Blue Jackets have killed 37 of 41 Stars power plays in the teams’ last 14 meetings.

The Blue Jackets lead the NHL scoring first in 18 games, going 8-6-4 in those games. … Dallas forward Alexander Radulov missed his 10th straight game with an upper-body injury and Stars center Roope Hintz was out of the lineup for the third time in five games with a lower-body injury. … Columbus forward Max Domi played in his 400th career game.