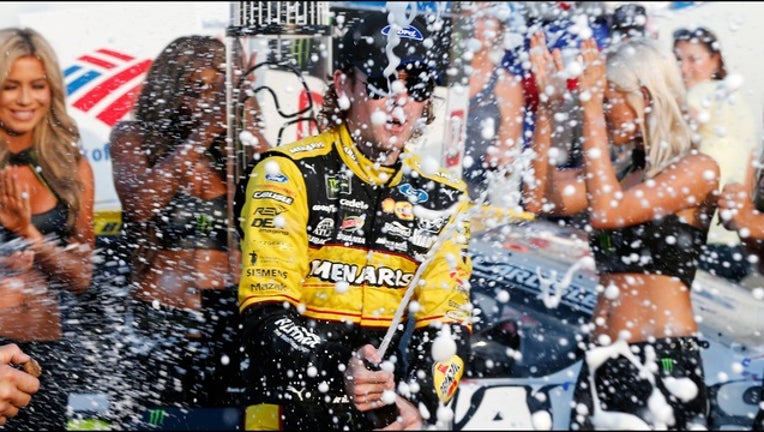 CONCORD, N.C. (AP) - Jimmie Johnson saw an opportunity to snap a 58-race losing streak, and went for it. It cost him a shot at an eighth NASCAR championship and allowed Ryan Blaney to steal a surprise victory in the debut race of the "roval" at Charlotte Motor Speedway.

Had Johnson just settled for second, he'd still be in the playoffs. Instead, he wrecked with Martin Truex Jr. and wound up in a three-way tie for the final transfer position into the second round of the playoffs. The seven-time NASCAR champion was eliminated Sunday on a tiebreaker.

"I knew where I was on the math," Johnson said. "I didn't think that I was going to crash or spin trying to overtake him like I did. I thought I was making a calculated move and giving myself the chance to win and unfortunately it didn't turn out that way."

The roval was a unique combination speedway and infield road course created to improve the racing at Charlotte. The unusual layout and unfamiliarity made it a treacherous circuit for the 16-driver playoff field because it was an elimination race for four of the contenders.

The race was unexpectedly clean until the end, which was marked by two different wrecks among the leaders and a red-flag period of almost 15 minutes. The chaotic close made for a suspenseful post-race period in which NASCAR had to review the results and break the tie between Kyle Larson, Aric Almirola and Johnson.

Larson and Almirola advanced, both by picking up desperation points on the final lap. Eliminated along with Johnson was Daytona 500 winner Austin Dillon, as well as Joe Gibbs Racing teammates Denny Hamlin and Erik Jones.

Blaney had hovered around the cutoff line most of the race and stunningly wound up the winner with an automatic berth for the Team Penske driver into the next round of the playoffs.

"I didn't expect that. Sometimes it is better to have a little bit of luck on your side," Blaney said. "You hate to see two guys take each other out, especially two of the best cars all day."

Keselowski was on track to win for the fourth time in five races until he misjudged the entry into the first turn on a restart with six laps remaining. It triggered a multi-car accident that collected Larson, who had led 47 laps. Keselowski's race ended after leading 29 laps.

Kyle Busch was also in the accident and mocked his fellow drivers for their error.

"All of us are just stupid and don't know where to brake," said Busch. "We all just drove off into a 90-degree wall because I guess we didn't have anything better to do."

Larson, meanwhile, had to limp a wounded race car around the track for the final laps to cling to his spot in the playoffs. Larson's fate was also determined in the final few turns when he passed the stalled car of Jeffery Earnhardt.

"I couldn't even drive my car it was so destroyed," said Larson, who was married last Wednesday to get the ceremony done during the season. "He was like 100 feet from the start/finish line and I could see him (Earnhardt) creeping and I was like, 'Don't go, don't go!'"

Johnson should have been content following Truex across the finish line and moving on in the playoffs. But he was once unbeatable at Charlotte, where he won eight points races on the oval, and saw the opening Sunday to grab his first win in well over a year.

Johnson tried to dive inside and pass Truex with two turns remaining and he ended up in a spin. Johnson collected Truex, who spun off course, Johnson's car came to a stop and Blaney scooted past for the surprise victory.

Johnson wound up eighth and out of the playoffs. He stood silently next to his car for several minutes as NASCAR reviewed the final sequence and updated the standings.

"I was more worried about the win than anything else," Johnson said. "We were in a transfer position and didn't get it. Just going for the win. The wins are so important and the veteran could have taken the safe route and didn't."

Truex, technically the defending race winner because he won on Charlotte's speedway last fall, faded to 14th and deliberately spun Johnson after the race.

"Last corner desperation behind us. He just overdrove it and was never going to make it and used me as brakes and turned us both around," Truex fumed. "It sucks. We could have raced side-by-side off the last corner for a win and that would have been cool. The fans would have been digging it, but instead we finished 14th and he's locked out of the playoffs. I guess that's what he gets."

What else happened at the roval:

DILLON'S BAD DAY: Austin Dillon probably would have advanced into the second round of the playoffs if he'd shown some patience.

He was on the right side of the standings at the start of the race but two separate incidents ended his race and his championship chances. Dillon's day came to a close when he ran over a curb to cause enough damage to his tire that it eventually failed and sent him crashing into the wall.

"I should have just been more patient and waited for more attrition," Dillon lamented. "But I actually felt pretty comfortable and running good. It's just hard to hold back in a treacherous race and I guess I didn't do what we needed to do."

ROVAL SUCCESS: Speedway Motorsports Inc. first envisioned the roval concept three years ago celebrated it as a success after the race.

"For me, it really lived up to the hype," SMI President Marcus Smith said.

Fans were energized by the idea of the roval and the anticipation built as drivers struggled to learn the track during two days of practice. NASCAR also had to change the angle of a troublesome tire barrier in turn 12 because so many drivers were hitting it during practice. Once it was moved, the area was no longer a zone for crashing.

UP NEXT: The opening race of the second round of the playoffs Sunday at Dover International Raceway. Kyle Busch is the defending race winner and Kevin Harvick won there in May.