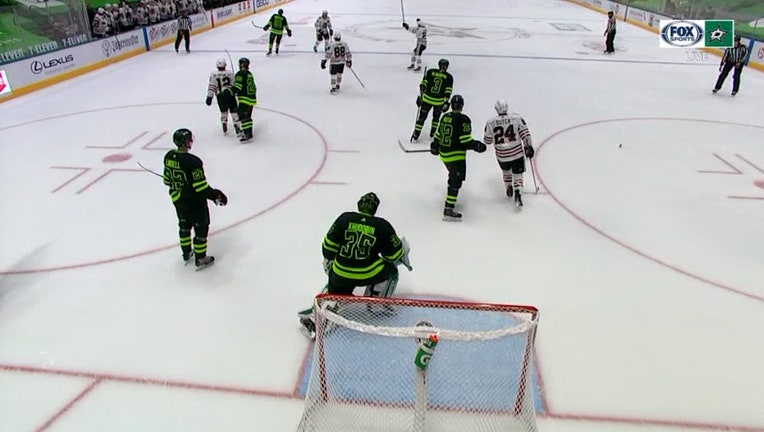 DALLAS - Carl Soderberg and Alex DeBrincat scored power-play goals in the second period and the Chicago Blackhawks scored on four of their first eight shots in a 4-2 victory over the Dallas Stars on Thursday night.

Patrick Kane and Adam Boqvist each had two assists to help the Blackhawks close their four games in Dallas this season at 3-1-0. In the opener of the two-game series Tuesday night, the Stars beat the Blackhawks 6-1.

Roope Hintz and John Klingberg scored for the Stars. They finished a six-game homestand 2-3-1. Anton Khudobin made only four saves, all on penalty kills, before being replaced by rookie Jake Oettinger in the third period.

The Blackhawks reached the midpoint of the 56-game season with 33 points and hold down the fourth and final playoff spot in the Central Division with a seven-point lead over fifth-place Columbus.

"We need to continue to have the hunger to get better," Blackhawks coach Jeremy Colliton said. "We want to be able to go head-to-head with the top teams in our division."

The Stars are 12 points out of a playoff spot, where they started the homestand. They have six games in hand on the Blackhawks having had games postponed because of health and safety protocol in January and the February weather and power emergency in Texas.

Much of the math from Thursday night’s loss obviously baffled and frustrated Dallas coach Rick Bowness.

"They had two even-strength shots on net after 40 minutes and they’re up four-nothing," Bowness said. "We outshot them 15 to 4 in the first and we’re down one-nothing. The power play was off. Penalty kill wasn’t good enough."

Kubalik gave the Blackhawks a 1-0 lead at 5:26 of the first period after gathering a loose puck just outside the blue line and slipping a backhander between Khudobin’s pads. It was Kubalik’s 10th of the season and seventh in his last 12 games.

Soderberg doubled the lead by redirecting a shot by Boqvist from the right point for a power-play goal, his fifth goal of the season, at 2:57 of the second period.

Keith scored on a slap shot from the high slot at 14:37 of the second period for his first score since March 11, 2020, when Chicago last played before the NHL shut down because of the pandemic.

"I’m not sure if you’d call it poetry," Colliton said, "but, listen, he does a lot of stuff that helps us win."

DeBrincat drew an interference penalty and scored on that power play from the right dot at 16:10 of the second period for his team-high 15th goal.

Dallas closed the gap with Hintz’s seventh goal of the season at 9:43 of the third period followed by Klingberg’s low wrister less than two minutes later, his fifth of the year.

Chicago is 10-1-2 in second games of series with nine straight wins. The Blackhawks are also 10-1-2 when they score first. Conversely, the Stars are 1-7-3 when opponents score first.

Kane went into play third in NHL scoring with 38 points before adding the two assists. He’s goalless in a season-high five straight games and had two shots on goal Thursday. … Soderberg has five goals and six assists in his last 13 games. … Hintz, in and out of the lineup recently with a lingering lower-body injury, has scored in three straight games and has points in 10 of the 16 games that he has played. … Oettinger had the only assist on Klingberg’s goal for his first NHL point.

Blackhawks: At Florida on Saturday and Monday.

Stars: At Columbus on Saturday and Sunday.