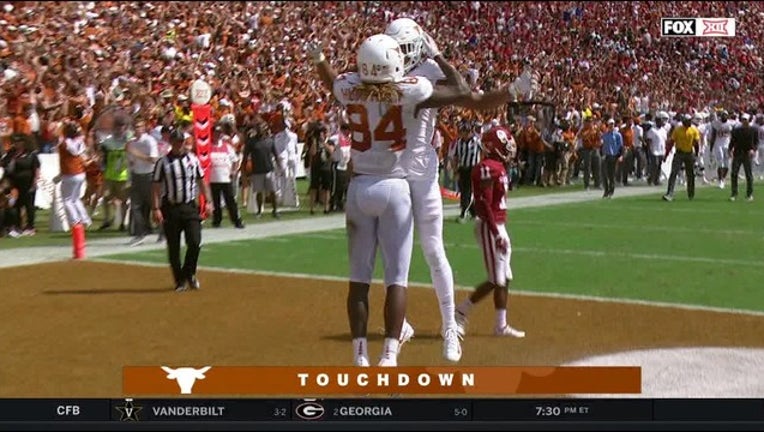 Then came a load of Longhorns teammates. Next came the surge.

With his legs churning and Texas pushing, Humphrey and the Longhorns moved the pile another 10 yards. The play picked up 19 yards, Texas converted on 4th-and-2 and finished the drive with a touchdown that would prove critical in a 48-45 win over Oklahoma.

Coach Tom Herman called it "the play of the game."

It was also the latest big play from Humphrey and Collin Johnson, two giants on the outside who have given Texas some of the biggest moments and touchdowns in a 5-1 start that has catapulted the Longhorns to the top of the Big 12 and their first top 10 ranking since 2010. Texas hosts Baylor on Saturday.

"I feel like we're one of the best receiver groups in the nation," Humphrey said. "We can't be stopped at times, really at all."

The highlights of a five-game win streak would back that up. Humphrey and Johnson have combined for 65 catches and eight of the team's 12 passing touchdowns. Both had touchdown catches against Oklahoma and Humphrey even threw one to Johnson on the first possession; it came on a play named "Jordan," with Humphrey lined up in the backfield for a direct snap and he faked a run before jumping and tossing the ball to Collins. With Humphrey a threat to run, no Sooner defender dropped off with Johnson, who was wide open in the end zone. The throw could not have been easier.

Humphrey became the first Longhorn to have a touchdown pass and reception in the same game since David Ash did it in the 2011 Holiday Bowl.

"I knew that was going to hit right when they called it," Johnson said. "When we called it in practice, it hit every time. They (Oklahoma) thought LJ was going to run it in. You don't know what he's going to do."

Herman has called Humphrey a "Swiss Army knife" kind of player who can do anything. Quarterback Sam Ehlinger has been able to count on Humphrey and Johnson to catch just about anything he throws their way, and usually with big results.

The two are a nightmare matchup for defensive backs: Johnson is 6-foot-6 and Humphrey is just 2 inches shorter. Humphrey consistently breaks tackles to pick up first downs while Johnson has a distinct advantage on jump balls. Ten of their 15 catches against Oklahoma resulted in first downs - or touchdowns. Humphrey's 47-yard catch-and-run score against Southern Cal is Texas' longest offensive play of the season. Johnson's diving touchdown catch against TCU is maybe the most acrobatic.

Johnson played every offensive snap against Kansas State and all but one against Oklahoma. He's just waiting to match Humphrey as a passer.

"When they call my number, I'm going to throw it down," Johnson said.