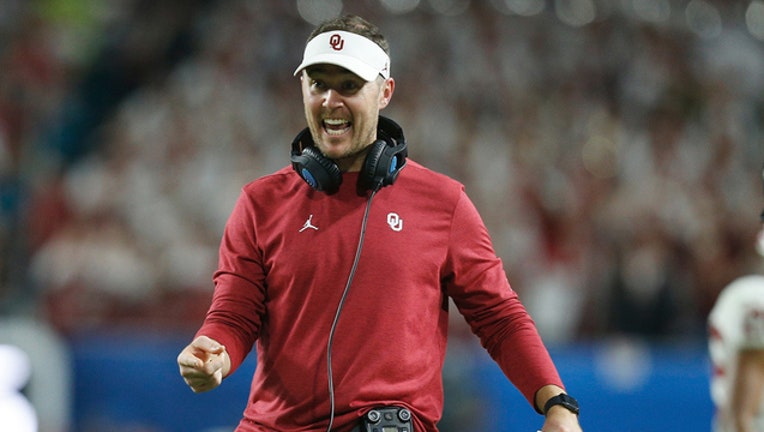 The Sooners, with yet another transfer quarterback, are the preseason favorite to win the Big 12 for the fifth year in a row.

Kansas is again expected to be on the other end of the conference standings, even with the return to the Big 12 of Les Miles - the only head coach in the league with a national championship at college football's highest level.

"I'm looking at the next game we get to play. I'm not really ready to define my success over time," Miles said Monday at the start of Big 12 media days. "I'm not looking way down the road, and I enjoy where I'm at."

The 65-year-old Miles had been out of coaching since being fired by LSU four games into the 2016 season when he got hired last November by Kansas, which finished last in the Big 12 for the fourth year in a row. The Jayhawks won only two conference games in that span that coincides with Oklahoma's record streak of consecutive Big 12 titles.

Oklahoma and Kansas were featured on the first day of media days, along with Oklahoma State, TCU and Texas Tech with new coach Matt Wells.

The other Big 12 teams will be at AT&T Stadium on Tuesday. That includes Sugar Bowl champion Texas and Kansas State with new coach Chris Klieman, who last season won his fourth FCS national title in his five seasons as North Dakota State's head coach.

Miles is 30 years older than Riley, the former offensive coordinator for the Sooners who is still among the nation's youngest Division I head coaches.

Even with Heisman winner Kyler Murray in the NFL after being the No. 1 overall draft pick - by the Arizona Cardinals and former Texas Tech coach Kliff Kingsbury - and four offensive linemen also getting drafted, Riley said the Sooners "don't plan on the offense dipping."

The Sooners also expect their defense to be better with new coordinator Alex Grinch. They also have the Big 12's preseason defensive player in the year in junior linebacker Kenneth Murray, who had 155 tackles last season.

Riley hasn't publicly declared graduate transfer Jalen Hurts from Alabama as Oklahoma's starting quarterback. Riley did the same at Big 12 media days last year, when he said Kyler Murray still had to win the job after playing behind Baker Mayfield, another Heisman winner who was a No. 1 overall pick.

"He brings game experience that Baker and Kyler did not have when they got here, but also doesn't have as much experience in the system," Riley said of Hurts, 26-2 as two-year starter at Alabama before being a backup last season. "He's a smart kid. He's eager and works very hard at it, and we have meshed together well."

"Having seen that and had that experience, and then playing there at Oklahoma State, always led me to believe that that football team or that school could have a great football team," Miles said.

The Jayhawks followed their 12-1 Orange Bowl championship season with an 8-5 record in 2008, a year before Mangino's final season. They haven't had a winning record since, and Miles is their fourth coach since Mangino.

Mike Gundy is going into his 15th season as Oklahoma State's head coach, after succeeding Miles.

"I think Les will be fine. And it'll be entertaining for the league," said Gundy, the former Cowboys quarterback and offensive coordinator. "There's always something out there he has going on."

No head coach has been in the league longer than Gundy. Gary Patterson is going into his 19th season at TCU, but this will be only the Horned Frogs' eighth season in the Big 12.

Oklahoma State had wins over two Top 10 teams, and another Top 25 opponent last season, but finished only 7-6 after a win in the Liberty Bowl.

Gundy looks forward to the opportunity to rebound from last season, when he said his team didn't play as well as it should have because it wasn't very disciplined or very tough.

"Those are two areas that we can control the outcome," Gundy said. "So I'm going to make a point ... to be a more disciplined, physical football team, and I think that will help our team. So I'm excited about just seeing the results."